In praise of slacktivism 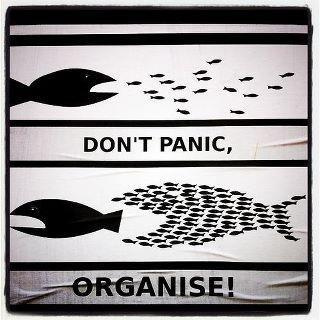 I’ve come across ever such a lot of uses of the word ‘slacktivist’ or ‘slacktivism’ recently. Described on Wikipedia as “a pejorative term that describes “feel-good” measures, in support of an issue or social cause, that have little or no practical effect other than to make the person doing it feel satisfaction,” it’s a dismissive way of describing online activism.

There are all sorts of ways to be an activist. Until the internet became so ubiquitious, activism was mostly about thermal underwear, flasks of tea, and watching a placard disintegrate in the rain. Okay, that’s perhaps slightly exaggerated, but my earliest activist engagement mostly involved being somewhere, physically, for an hour or so. And I’m sure it always rained.

Demonstrations are a great way to grab attention, I wouldn’t deny that (and may I put in a little plug here for Reclaim the Night, 24 November 2012). Meeting up with others who think like you, raising, quite literally, a common voice – glorious stuff.

But. If your demonstration doesn’t have that many people, and only lasts an hour, and gets no publicity, how many minds have you changed? A few? The vast majority of the world will carry on blissfully unaware that you have a cause at all.

Meetings, demos, consciousness-raising (CR) groups – all of these are great, but I’d say there are some ways in which slacktivism is better. The first is inclusiveness: mothers don’t always want to bring small children to a demo, and childcare is inevitably difficult to source for such things. Disabled people struggle to get into town on disabled-unfriendly public transport. Younger people might not have the support of their families and be discouraged from physically attending events. Those outside metropolitan hubs might not fancy a 5-hour round trip just to get to a 1-hour meet. Working mums might just not have the time.

By contrast, slacktivism is open to many more people. Keen feminist teenagers can use the web at school, even if their parents would ban them from demos. Disabled people can use social networking forums, at their own pace and at whatever time of the day or night is convenient, without worrying about accessibility of an event.

The anonymity of the internet also allows people to share experiences online without the emotional impact of talking in person at CR groups. It’s terribly difficult to tell someone, even a friend, that you’ve suffered sexual assault or domestic violence, for example. But log in with an anonymous username and it’s much easier. The success of Hollaback! and similar groups both provides a valuable outlet and raises awareness: this is the CR of our times.

The second is impact. A huge demo will have a huge impact, but the logistics of organising that are huge. By contrast, an internet campaign can attract hundreds of thousands of signatures, retweets, facebook posts and emails almost overnight. In addition, online campaigns keep going. Nobody’s going to be frozen solid and desperate for a wee after 3 hours online campaigning. And they have the ability to bombard politicians; thousands of emails on one subject to one person will at the very least persuade them that there is an issue. This isn’t dissimilar to Amnesty International’s letter-writing campaign which has been going for decades.

The third is dissemination. Write something on a placard and wave it for an hour, and an hour’s passers-by see it. Write something on the web, tweet it and facebook it, and watch it go viral. A couple of months ago, I started a hashtag (#ididnotreport) – the archetypal slacktivism, if you like. Two months later, it’s being used in five different languages. You don’t get that sort of attention from standing outside the House of Commons in the rain.

Curiously, I’ve also found that people will ignore a protestor. We have a peculiarly British way of looking straight ahead and pretending that we can’t see 100 people with placards – you saw it with commuters when the Westminster village was in place, too. There’s a tent there? With pictures of Iraqi babies with missing limbs? Nope, choosing not to see that. Say something on the internet on the other hand, and your detractors are drawn magnetically to you, which is both a burden because they will probably be abusive, and a blessing because these are the people who need to hear it most. There’s never been any point preaching to the choir.

I don’t want to denigrate real-time activism – long may it continue. But there’s certainly a place for slacktivists, and I’ll wear my slacktivism label with pride.

The photo above is taken from Daryl @reMedia8 used under the creative commons license.