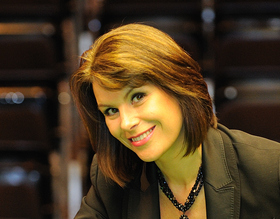 The First Lady of snooker: an interview with Michaela Tabb

Philippa interviews Michaela Tabb, ‘The Lady Ref’, who has a list of ‘firsts’ longer than any other referee in professional snooker. They discuss the resentment she faced from others at the start of her career, and how she is encouraging other women to get involved in refereeing pool and snooker professionally.

Michaela Tabb was the first woman to referee a professional ranking snooker tournament, as well as the first woman ever to referee a World Championship Final. This year, she will be in charge of her second Crucible Final, and has been joined by another female ref, Zhu Ying, who took some of the first round matches in this year’s competition. This brought about another record – for the first time, two women walked out together in the Crucible to referee matches side by side.

I met with Michaela Tabb at the start of this year’s tournament to talk about her 10+ years as a professional snooker referee, working in an almost exclusively male environment and the attentions of her rather devoted fans, as well as how she got through the challenges she has faced and her successes along the way.

Michaela Tabb’s cue sports career began as a pool player: she headed the Scottish Ladies 8-ball team and won UK and European singles titles in 1997 – 1998. From here she began refereeing pool matches, and was recruited by World Snooker in a bid to change the image of the game. She explains,

“World Snooker had always gone to this professional Referees Association to get their refs. They changed that the day that they gave me a contract, and a few others a contract, they basically stuck their two fingers up to them and said we’ll deal with who we want to deal with”.

This fasttracking, as well as the fact that she was a woman, led to resentment from certain figures within the game. I ask Michaela whether, when she started, she felt she was not only proving that she could do it, but whether she felt she had to prove that women could do it at all. 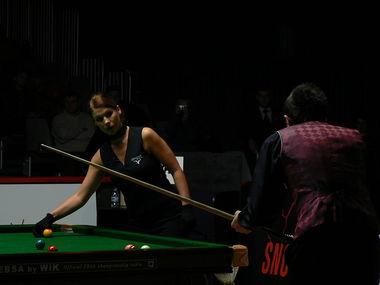 Michaela no longer experiences any resentment or hostility, having proved herself more than capable, and I ask her how long it took for her to be fully respected as somebody great at her job.

“I mean it took a little while, but obviously I have been doing the job for over 10 years now, so it’s the new ones now that they… It’s not that they turn their attentions to, it’s just I’ve earned my place, so no there’s nothing, nothing like that now”.

Her passion for the sport is clear, as is her commitment to being the best referee she can possibly be.

Michaela has played a big part in inspiring other women to take up snooker and pool refereeing. One thing she is doing now is mentoring other women in the game. She explains that when she was starting out, she had a lot of support from, amongst others, fellow referee Jan Verhaas:

“It was nice to know that I had a couple of people that had mentored me, and took me under their wing. So when it came time for other females to come through, I felt like it was important to be able to give that back”.

The support that Michaela received was so important to her that she knew she had to offer the same to other upcoming referees, and she refuses any suggestion that they are competition to her.

“Any help that I have ever been able to give any ref, but obviously women in particular, I’m… they are not a threat to me. Any woman that is coming through is not a threat to me. So anything that I can do to help them is only for the good of the game.”

Michaela is aware that she has inspired other women to take up refereeing, and feels strongly that this gives her a responsibility to then encourage and support them where she can.

“The thing is, I’ve been in the situation where it’s hard and you’ve got the scrutiny, so I just think it’s only fair to try, you know? I weathered it, and there was good times, there was bad times, it wasn’t all good, but you you know, in any way for some of the other ones, because there are so many women now and nearly all of them that I have spoken to have taken it up they’ve seen what I’m doing. So I cannae be their hero in one perspective and not help them in another, you know? No, I want to sort of do what I can for them to continue being that sort of idol that they thought, you know?”

In the second part of the interview, to be published tomorrow, I talk to Michaela Tabb about how she feels about the attentions of her fans, whether she is a feminist, and her advice for other women who want to get involved in refereeing cue sports professionally.

You can read Part 2 of this interview here.