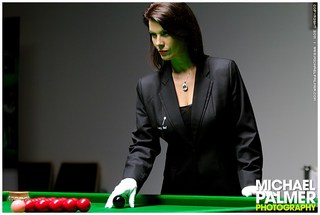 Flying the flag for women in snooker: Interview with Michaela Tabb part 2

The second part of Philippa’s interview with snooker referee Michaela Tabb who will referee the World Championship Snooker final today and tomorrow.

This is the second part of a two-part interview. You can read the first part here.

As the Snooker World Championship Final gets underway today, the referee is under almost as much pressure as the players during the long, long match ahead. This year, Michaela Tabb is refereeing the Crucible final for the second time, and she talked to me about the extra attention she gets as a female referee, and offers advice for women wanting to join the profession, as well as discussing her hopes and fears for the final match.

Michaela Tabb is not just popular within snooker for her refereeing skills. She was half-expecting the attention that she would get as, as she puts it, “a woman in a man’s world”, but was not quite prepared for just how many fans she would gain. She is recognised far more than her male counterparts, which means that she is under incredible scrutiny. This can be seen with a quick YouTube search for her name, for instance, where her every move around the snooker table seems to have been filmed and watched, sometimes many thousands of times.

“As the only female, you stand out”, Michaela explains. “The men don’t stand out the same. So I still, to a certain degree, have to work harder. Because it’s more noticeable if I do anything wrong”. 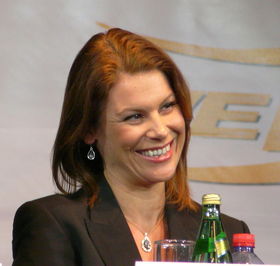 Michaela does enjoy the positive attention she gets from fans, feeling flattered by flirtation, and explains that there have been very few occasions where anybody has crossed a line into inappropriate behaviour. When she first entered the profession, she says some people viewed her as “easy meat”, but they soon learned that she takes no nonsense, and has clear boundaries about where acceptable behaviour starts and ends. This has been witnessed during matches when she has dealt with unruly audience members swiftly and firmly, but she insists that the vast majority of her interactions have been respectful and enjoyable.

It is at Exhibition matches that she has encountered a few problems,

“You know when you do the exhibitions and people have had a few much too to drink and they think, then, they can say what they like? Well that’s not acceptable, and I sort that out […] I’m not having anybody demean the person, the reputation I’ve built up just on that. A bit of fun, yeah, but that’s where it ends.”

It is her enjoyment of being complimented and seen as attractive that makes her wary of calling herself a feminist.

“I like to think I’m flying the flag for women, but I’m not standing out there bashing it off the drums kind of thing, you know?”

It is precisely because she is flying the flag for women that when I ask what advice Michaela has for other women who are interested in getting involved in refereeing professional snooker, she is full of encouragement.

“Go for it! Get as much experience as you can, whether it’s in the local league, or whatever, you’ve got to. I mean, I made a number of mistakes, and my learning curve was obviously, basically, on TV, because that was where my experience was gained. And the best way to not do that is to get out there and get as much experience under your hat as you can”. 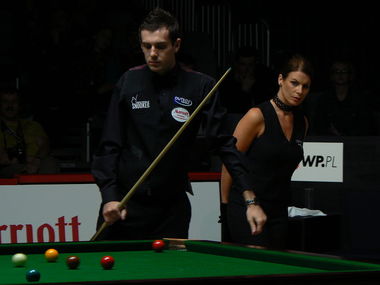 The two-day final gets underway today, and the pressure is certainly on. While she is looking forward to taking on the challenge, she has fears about maintaining her focus.

“What worries me is – depending on who the players are, if they’re long sessions – I’m worried about my concentration, because I give it so much to every session, that I’m quite worried that I’ll be mentally knackered by the final session is if it is going to end being a full session. […] So that’s a worry, because I do put so much into each session.”

Michaela confesses that she always finds herself rooting for the player who wins the first frame, no matter who they are.

“When I’m actually reffing a game, whoever wins the first frame, that’s the one I want to win the match. Yet I don’t give a hoot who it is – whoever goes one nil up, he’s in the lead, and I just want him to… […] I couldn’t even tell you what their names are, but I want a nice match, I want a clean match, and I don’t want to be out there for hours and hours. […] I couldn’t care who it is. It could be a huge upset, I couldn’t care less. I’m quite happy with that.”

And as a woman who herself was the focus of considerable upset amongst some of snooker’s old guard, she has more than proved herself capable. She is considered not just “a good female ref”, but as one of the best referees in the game. She will need every skill she has learned over the next 36 hours, and will receive little of the credit.

However there are many of us who, along with cheering along the players, will be rooting for the ‘Lady Ref’ too.