This weeks music paste up includes two of the most exciting talents in rock music today in conversation: Tune-Yards and St Vincent.

Holly and I were also recently sent a link to a very exciting film about a Portuguese Riot Grrrl band, Everground, who were signed to Lisbon label Beekeeper. While this documentary was made many years after the band split up, it does still make for really enjoyable viewing.

Continuing the Riot Grrrl connection, Oxford’s Secret Rivals will be touring in May and June, and you can see them at:

Port Mahon in Oxford tomorrow, with The Lovely Eggs

Folky renaissance woman Kathryn Bint, who records as One Little Plane, has a new album, ‘Into the trees’, which is out now on Kieren Hebden’s Text Records. You can hear the eerily beautiful ‘She Was Out In The Water’ here. If anyone would like to review this album, please can you get in touch with me? Many thanks.

Meanwhile, this is the excellent Ms Mr with their new track ‘Hurricane.’

Halifax/Montreal duo Purity Ring (Corin Roddick and Megan James), who 4AD describe as making “lullabies for the club, drawing equally from airy 90s R&B, lush dream pop, and the powerful bone-rattling immediacy of modern hip hop.” release their debut album Shrines in July. There is something vaguely unsettling about their brand of electro pop, not to mention intriguing and, yes, I am once again looking for someone to review this album. If the clip below intrigues you sufficiently, please feel free to contact me.

The more guitar based Daughter have also recently signed to 4AD, and you can hear the poignant ‘Landfill’ below. 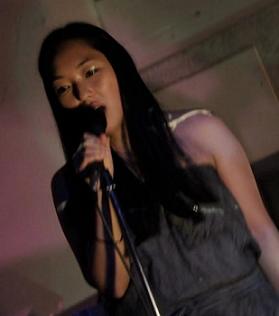 From newly signed to unsigned, this is the debut single by singer/recording artist Carol Rhyu and producer John Ho, who record as White Blush. A mournful eerie, delicate soundscape, White Blush cite their artist likes as Purity Ring, Grimes, Florence + The Machine, Cocteau Twins, Julee Cruise, Kate Bush, Nancy Sinatra and Nico, and from the evidence of ‘Without You’, it sounds as though the LA based White Blush will go on to great things.

You can find out more about White Blush by clicking here.

Until the next time…

This piece was updated on 15 May on the advice of Carol Rhyu who has been having problems with her video on Vimeo. I have replaced the original clip of ‘Without You’ with a new upload on Youtube