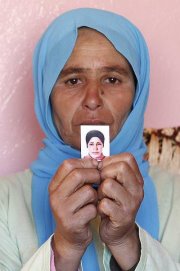 Rape hidden by marriage in Morocco

’16 year old Amina’s parents forced her to marry her rapist to preserve their “dignity”, she killed herself to preserve her own.’ @hadearkandil – Hadear Kandil

Since February 2004, King Muhammad VI has reformed many out of date laws within Morocco to approve gender equality and human rights in the country. He bought the legal age of marriage up from fifteen to 18. Custody of children does not instantly go to the father. Women are no longer ‘owned’ by their husbands and forced to obey them. Divorce also now has to be consented by both partners.

Yet one of the cruellest laws still remains; Morocco’s penal code states that a rapist can escape being prosecuted if he marries his victim. The article definitely does not beat around the bush. It is written in plain black and white over the space of 7 lines. The government have said since 2006 that they will change the law and the violence faced to women. Still nothing has been done. Ten percent of the lower seats of the Moroccan parliament have to be reserved for women. It is true that King Muhammad VI has made the country one of the fairest for women’s rights in the Middle East, but one shocking and barbaric law seemed to have been bypassed.

On 10th March 2012, Amina Filali committed suicide after being forced to marry the man who raped her when she was 15 years old. The 5 month long marriage resulted in her being continuously abused and beaten, until she finally took her life by ingesting rat poison at the age of 16.

The article making ‘rape-marriage’ legal states that both parties must consent. Amina was forced into it to protect her family’s ‘honour’, as the rape resulted in her losing her virginity. It did not matter that she had not consented to what she had to ordeal; she had blighted the family name. It is also unclear as to whether she would have been tried as a child or an adult. As a child, the man who raped her and tore her whole life apart actually had more human rights than what she did. She would have had no choice in her future’s outcome.

Morocco’s laws have now been pushed into the world wide lime light. We are in 2012 and the country is still living under incredibly outdated laws where men have total power and women are expected to ‘obey’. President of the Democratic League for Women’s Rights (LDDF) Fouzia Assouli stated that the whole law was an ’embarrassment’ to maintain traditional practice in the country that allows men to escape punishment through marriage. As Amina’s tragic story becomes international there is still hope that the law can be abolished completely from Morocco’s penal code to stop such a brutal and inhuman event happening to another innocent girl.