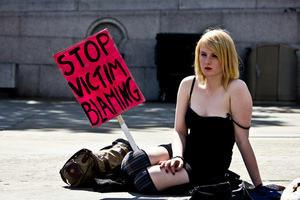 Slut-shaming and victim-blaming: the journalist, the vicar and the politician #bbcqt

Philippa writes about an outrageous discussion on Question Time last night, where nearly every speaker on the recent ‘grooming’ case managed to blame the victims without mentioning the perpetrators.

I’ve always enjoyed Question Time, but watching it while on Twitter brings a whole new perspective. Following the #bbcqt hashtag means that every aspect of my amusement, fury, skepticism, agreement and more can be shared, and validated, with others live. What’s more, the hashtag truly makes the programme 50 times funnier, because people’s pithy comments and thoughts are spot on and hilarious.

So, last night I sat down to Question Time with Twitter loaded and ready. The second question was, “Was race an issue in the recent Rochdale grooming case?”. If only the panellists had read our blog yesterday! I braced myself for some awkwardly-worded attitudes about race and culture, but what came next actually stunned me.

The first person to answer was journalist Peter Oborne. My jaw dropped open when he stated that

“One of [the things involved] was the young girls who accepted the advances of these disgusting men. What does it tell us about what’s happened to our society that we have 12 year old girls, 13 year old girls, who are happy to give up their affection and their beauty to men in exchange for a packet of crisps or a bit of credit on their mobile phone?”.

No sooner had he completed his victim-blaming tirade when an audience member contributed to the discussion. This man, a vicar, stated,

“Children are guided by peripheral ideologies and interests, where they feel it is appropriate, at 13, to go out – forgive me for saying this – I’m not saying the victims in this case did that – but it seems prevalent on the streets in the area – where they go out dressed as if they are looking for that sort of issue to take place. They don’t give themselves the privilege of growing up any more”.

Yes, he went there. 12 and 13 year old girls going out dressed as if they are looking for it.

The next audience member was a woman who feels that society is not “addressing race”, and that “we’ve got to stop with this political correctness […] We’re not racist, but we want to address this issue”. Yes. Not racist, but…

Next up was Tory MP Caroline Spelman. The first thing she did was echo what the judge in the case said, that it was “lust and greed” at the heart of this case, not race. Good. She also went on to point out that the sexual exploitation of women and girls is endemic. True. However, she then went on to add her own kind of victim-blaming to the mix.

“It’s not an easy time to be the parent of young teenage girls. You can’t just lock them up at 7 o’clock – we don’t want to live in a country where we need to lock up young women at 7 o’clock. We try and give them the right values, the right instincts, to keep themselves safe“.

Oh, Caroline. By this time, I was raging.

And I wasn’t the only one.

Absolutely amazed that a debate on the sexual exploitation of children is focussing on the behaviour of the children involved. #bbcqt

Tweets were flying by at top speed, such was the strength of feeling. The panellists, the #bbcqt hashtag, and even the word ‘vicar’ were trending topics, meaning that they were the subjects being discussed the most. 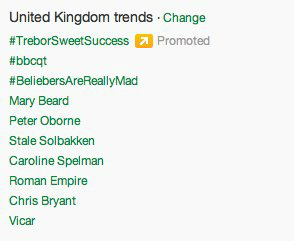 Even Mary Beard, who in every other way was wonderful, gave a response about teaching teenage girls not to be attacked, rather than teaching boys and men not to attack.

Some of the audience members pointed out that the police failed the victims initially, as did the care system.

When it came to Lord Oakeshott, he thankfully made a point of saying,

“I’m sorry to disagree with the Minister of religion in the front, but I thought he was verging on that it was partly the girls’ problems for how they dress or something. That cannot be right – this was an evil crime, whatever the girls were wearing, and we must focus on that, surely”.

Finally! Then, sadly, back to Oborne.

“We have to ask, why were these girls so vulnerable? Why were they so ready to surrender that innocence for a bag of crisps?”

Then, god help us, we returned to the vicar. By this stage I was too apoplectic with rage to even hear what anybody else said. I believe he explained that we had misunderstood him.

Does it really still need to be said that these victims did not surrender their innocence for a bag of crisps? That they were not happy to give up their affection in exchange for a packet of crisps or a bit of credit on their mobile phone? That they did not go out dressed as if they are looking for that sort of issue to take place? Do we still need to point out that teaching girls the right values and instincts does not make any difference to the decision a rapist may take to rape them?

It was offensive, it was depressing, and it was terrifying. Mary Tracy on Twitter summed up the discussion well.

[The first image is a photograph of a woman sitting on the ground at the London Slutwalk, with a bright pink placard reading “Stop victim-blaming”. It was taken by Tom Radenz and is used under a Creative Commons Licence. The second image is a screenshot of the Twitter trending topics which was taken by @laurevans311]