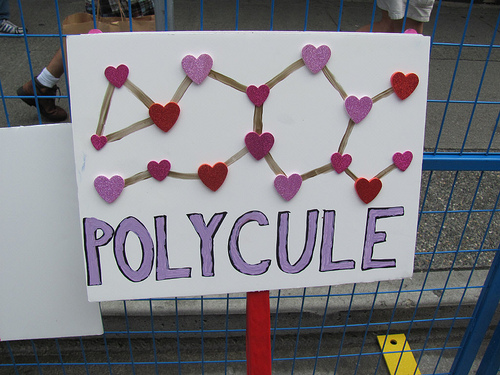 The poly-feminist manifesto: towards a feminist non-monogamy

Where did this manifesto come from?

Included below are the answers the workshop participants came up with. Where relevant, answers have been collated, and all answers are anonymised.

Then, we presented a manifesto which sets out one way in which these ideas might be achieved.

Both workshops were attended by around 10 people, with an overlap between the two groups. We consisted of mostly feminists with some feminist allies and people sympathetic to feminism, all of us practicing or interested in various forms of non-monogamy.

There were people of a mixture of sexualities, ethnicities, experiences of disability, positions on the cis/trans* spectrum, ages and class backgrounds, but with a skew towards white, currently non-disabled and cissexual 20-something women.

The material primarily came from the experiences of those in the workshops. As a result, much of the discussion was about how sexism is experienced by people with a number of other privileges, and there is certainly a lot of experience missing.

In the end, the manifesto was written online after the event and circulated over a mailing list of people who’d been at the workshops. There was less participation online than there had been in the workshops, and so the manifesto should be taken as one possible viewpoint on how to implement the group’s ideas rather than a definitive statement.

We hope that this piece will be a continuation, not the end, of attempts to integrate feminist principles at a basic level with non-monogamous community values. We hope it may also be useful in a wider context, as many of these problems are certainly not specific to non-monogamy.

A note on language

Here we talk frequently about men and women. People come in an infinite variety of genders, but in a patriarchy, some people are identified by the society around them as ‘men’ and given certain privileges over those the society identifies as ‘women’.

Some of these people may be neither men nor women, or they may be both, but the social power relations between them can still have strongly gendered qualities.

Some individuals within our communities are politically active in anti-oppression movements, but they don’t tend to be the people who exercise power in those communities

Which feminist ideas and values are relevant to non-monogamy?

This question received the widest variety of answers, and as such we haven’t attempted to synthesise them into one narrative but have presented them with minimal editing. There was some discussion on several of these points, but I’ve included every point which was raised so that the reader can see the variety of opinion present in the workshop.

Do our poly communities hold these values? 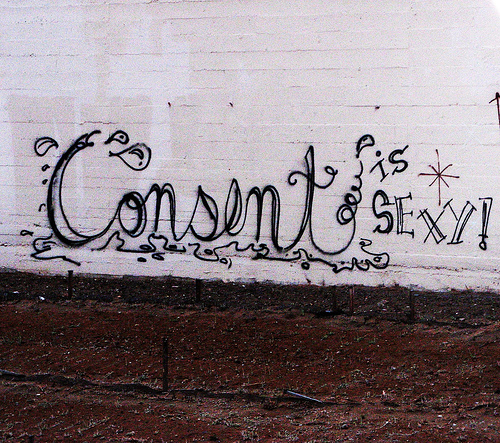 We agreed that the feminist values above are also poly values, or at least should be. But our communities are, as one participant put it, “curiously non-feminist”.

Our communities often describe themselves as ‘apolitical’ and reject discussions of gendered power dynamics as being an unwanted, ‘overly political’ activity. Some individuals within our communities are politically active in anti-oppression movements, but they don’t tend to be the people who exercise power in those communities.

Our communities are often more diverse than mainstream communities, but not as diverse as they could or should be, for example along the axes of age, money, race and gender.

Many of the individuals with more social capital in our communities are financially comfortable men in their 30s and 40s.

Perhaps one reason for some of these diversity issues is the flat pricing structure of some poly community events. While those events appear to be offering equality of opportunity by charging a flat fee, many marginalised people have less money, and so this doesn’t lead to an equality of outcome. Even for events offering scaling fees, the lowest fees are relatively high.

Do our poly communities practice these values?

Poly as an idea can be feminist. Many people in our communities are not. Although non-feminism isn’t always actively malicious, when sexism is a social norm, not being sexist needs active work which many people are unwilling to put in.

There is a lot of talk about using or rejecting labels such as ‘primary’ and ‘secondary’ partners (where ‘primary’ often indicates long-term committed partnerships and ‘secondary’ often indicates relationships involving less mutual or time commitment). But semantics aside, actual hierarchies often exist in which it is effectively clear who in a relationship is primary and who is secondary.

Secondaries are frequently screwed over, often most of all in situations where the people involved specifically describe themselves as not operating a hierarchical relationship.

We felt that in a society where it was common for men to have multiple sexual relationships, for example affairs, non-monogamous communities in which many women have multiple relationships are in some ways fundamentally more egalitarian. However, we noted the common trope of the male, well-established community figure who has many female partners, and wondered if, even in a community where number of partners doesn’t seem to correlate to gender, whether there can still be power imbalances when we look at which men are forming relationships with which women, and how. 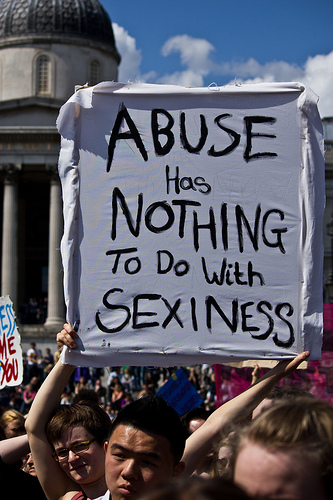 However, our facilitator noted: “I hope I’m correctly capturing the understanding of the group when I note that, of course women have agency and form relationships based on their needs and wants, as well as men. But there is pressure on that agency and it’s the cumulative effect of that pressure which we were discussing.”

We like to say that we value consent, but many people still behave non-consensually, and a minority of people in our communities are recognised as predatory even by those who don’t know much about the dynamics of abuse. It is not the responsibility of survivors of abuse to address non-consensual behaviour in any community, and yet survivors sometimes appear to be the only people talking about it.

Abusive behaviour is rarely (if ever) discussed publicly and although women often talk about it among ourselves, the perpetrators are rarely challenged directly and even between ourselves it’s often minimised or dismissed.

We recognised that people of all genders can be survivors of abuse (although numerically it is overwhelmingly perpetrated by men against women) but also that talking between ourselves about abuse is a cultural practice typically occurring between women.

This can create a dangerous environment for people new to the community, who have not yet received the word-of-mouth warnings about who to avoid or be wary of.

“People new to a community are often vulnerable to tactics from abusers such as the implication that various kinds of abusive treatment are normal in polyamorous relationships,” the facilitator added, “and that if they were ‘properly poly’ they wouldn’t object to the abuse.”

The group talked about ways of addressing predatory behaviour and abuse. We discussed several strategies:

We spoke about how individuals sometimes make private approaches and very rarely look for external intervention, but that public disclosure and community accountability are almost completely absent. Where individuals have spoken up in public, our communities haven’t tended to support them and often turn against them.

What can we do to promote feminist values and their practice?

As a group we came up with several ideas to improve our community:

For many women, this is a comfortable space in which to gain more experience with leadership roles.

These raise the profile of the women who run the workshops, and build the confidence and skills of everyone who joins in. In general, they give people lower down the privilege hierarchies in our communities a chance to build more social capital and they’re great fun.

Create and nurture an understanding of what it looks like to put pressure on consent, how to flirt without doing this, how to say ‘no’ even under pressure, how to receive a ‘no’ without putting pressure on the person who is stating it, and how, by doing all these, to carve out spaces in which ‘yes’ and ‘no’ are respected equally – sometimes it’s difficult to find the space to say ‘yes’ when constantly being asked, “What about now? Now?!”

As many options as possible should be made available at all times to survivors of abuse, and it is their decision, not the community’s, which options they choose 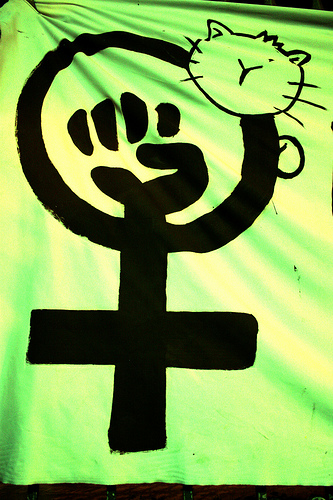 This isn’t just about men putting pressure on women’s consent, but there are definitely many men who need to do a lot of learning in this area. Some already organise men-only groups to deconstruct masculinity, male privilege and male predatory behaviour. Some of the workshop participants were uncertain about men-only groups and stated that any groups like this must have clear feminist principles to avoid them becoming “one more boys’ club”.

“There wasn’t much discussion at the workshops on how we might begin to do community accountability work,” added the facilitator. “But if the reader is interested in the subject and wants to know more, two good places to start might be the Duluth Model and the Freedom Programme. There is also a recent book on the subject, The Revolution Starts At Home: Confronting Intimate Violence Within Activist Communities, which also comes as a significantly abridged downloadable version.”

We talked about the necessity for more bystanders to call out predatory and abusive behaviours when they see them. This may mean speaking privately to the perpetrator, speaking to organisers, offering support to the person experiencing the behaviour or speaking up publicly if that person has given their consent.

Making new options available besides external intervention should never, ever be used as a way to persuade somebody that they must not contact the police. As many options as possible should be made available at all times to survivors of abuse, and it is their decision, not the community’s, which options they choose to follow.

Though involving external forces might be seen by some to harm the image of our communities, what harms them more is taking away the choices of abuse survivors who have already experienced their choices being taken away as part of a pattern of abuse.