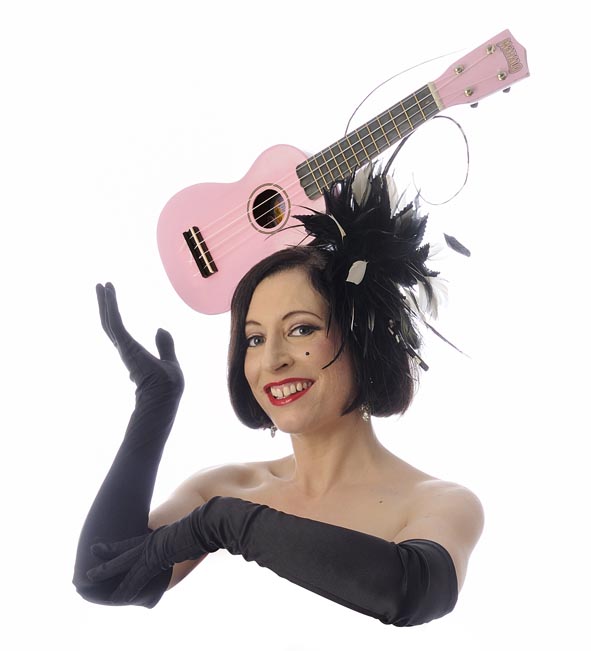 Ukuleles for the ladies

Cabaret singer and four-string-strummer Tricity Vogue talks about the ukulele’s appeal to women.

When I picked up my first ukulele in 2007 it was my female band-mate, Lana, who put it in my hands. Perhaps that’s why I’ve always thought of the uke as a girl-friendly instrument. When I struggled with my first chord I never thought that five years later I’d be dubbed a “Ukulele Doyenne” (thanks Time Out!) – I had no idea how the instrument would transform my performance career.

I’d been working as a jazz vocalist for fifteen years by then, and was used to the role of ‘girl singer’ – the one who stood at the front in pretty dresses, while the male jazzers got on with the ‘real’ music. Launching my cabaret persona as tongue-in-cheek vintage diva Tricity Vogue in 2004 was a step towards creative control. But it was only when I took up the ukulele that I found confidence in myself as a musician, and started to understand how music worked well enough to metamorphose from girl singer into bandleader – the bandleader of an all-girl swing band at that. This simple little instrument tore down the walls of mystique around music for me.

It’s fair to say I’m a ukevangelist, but I’m not the only woman whose musical life has been transformed by four strings, as I found out when I asked other women ukulele players for their own experiences. Comedian and “geek songstress” Helen Arney confessed, “I genuinely took up the uke because, at 5 foot 3 with a back problem, I simply couldn’t lug around a full size stage piano any more! But what has happened now is that I feel completely at home with the uke. It’s just the right size, shape, volume, sound and pitch for my voice. Put anything bigger into my hands on stage, like a guitar or a piano, and it creates an enormous barrier between me and the audience, making it more difficult to connect” says Helen. “Any more than a handful is a waste.” 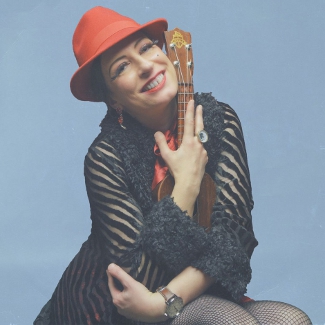 Singer Katy Carr plays the ukulele not only for its versatility – “I have sung in toilets, weddings, on the street, at the Royal Opera House and in retirement homes” – but also because it suits the timbre of her voice and the traditional songs she sings, as well as her own compositions: “I have been known to sing all of my songs off my last album, ‘Coquette’, on ukulele.” The album has been nominated for a 2012 London Music Award alongside Kate Bush, PJ Harvey and Laura Marling. The clincher, for Katy, is value for money: “you can pick one up for around a tenner!”

Lana Shelley, aka children’s entertainer Ilanabanana, and the woman who put my first ukulele in my hand, cites laziness and ergonomics: “From the laziness side: a uke is much easier to carry anywhere, and even fits under car seats. Much easier to practise a song at a red light with a uke than with a guitar. From the ergonomics side: when I was pregnant I could no longer stand up and hold a guitar on my hip to play it, it would just slide off. With the uke I had no such problems as its size and shape make it easy to clutch under my arm or rest on my chest.”

It’s not only the instrument itself but also the scene around it that’s woman friendly, as recent ukulele-convert Amelia Clark discovered. “As a woman, it is sometimes hard to rock up to a pub on your own – there’s the threat of predatory attention that men don’t get just ‘nipping for a pint’. With the uke nights, this is never the case.” Singer-songwriter Jo Stephenson, who learned the instrument from her mother, believes the ukulele community is a safe space for women “because of its open-mindness and willingness to welcome all and sundry. While the uke scene is often cheeky and naughty, it’s never sleazy.”

It was this spirit of inclusiveness that inspired me to start a ukulele cabaret. The night began in Kings Cross pub The Lincoln Lounge, where it’s still running five years later, beloved of landlady and regulars alike. Meanwhile the show goes from strength to strength, giving more and more ukers a platform to perform, and a place for a group strumalong. After two hit years at the Edinburgh Fringe, and its own chapter in Radio 4 Book of the Week The Uke of Wallington, the Ukulele Cabaret is about to bring its low-fi approachable charms to Deptford’s Albany Theatre for a show in the garden on Sunday 10 June. So come along and find out why uke-lover Amelia Clark “would rather have more ukuleles than shoes” and why Boston-based burlesque poetess Jojo Lazar believes “the ukulele is a way to get away with musical magic”.

I’ll leave you with a few words from Clare Uchima, one of the acts performing at the Albany:

“I didn’t realise there was a big ukulele scene in London and, having come from a male-dominated jazz scene, it was so refreshing to find Tricity and other women players. Uke players and lovers have been so supportive and encouraging… The ukulele cabarets are just brilliant!”

Tricity Vogue’s Ukulele Cabaret will be at The Albany, Douglas Way, Deptford, London (SE8 4AG) on Sunday 10 June, 7pm. Tickets are £7, with a £12 charge (£10 concessions) for those wishing to take part in the Ukulele Cabaret Workshop.

[The first picture in the body of this blog post is a head and shoulders shot of Tricity Vogue dressed in long black gloves and a black fascinator, against a white background, with a pink ukulele on her head. She is smiling and her right arm is across her front, while her left hand is held outwards and upwards as if to behold the ukulele. This was supplied by Tricity herself and taken by David Windmill.

The frontpage picture and second in this blog post shows Tricity Vogue dressed in black and an orange hat, against a light blue background. Both her arms are wrapped around a brown ukulele, she is smiling and her head is tilted to the right. By Gavin Mecaniques. Permission to use here with credit.]