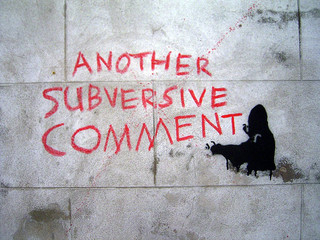 Here’s this week’s round-up of some of the bits around the internet we haven’t had a chance to blog about. Please add links in the comments section if there’s anything you came across that you want to share too. Please note that a link here doesn’t imply endorsement or agreement, and some links may be triggering.

That’s it for now – more next week!

Image by Flickr user duncan. It shows graffitti on a wall reading “Another subversive comment”. It is shared under a creative commons license.