It’s also the entry criteria for a UK conference for radical feminists, (which Laura blogged about on The F-Word last week).

But this phrase just doesn’t make sense, in my opinion. It’s also wrong.

Type the phrase ‘women born women’ into Google and the first result will take you to Wikipedia, which says:

The term was developed during second-wave feminism to designate spaces for, by, and about women who were identified as female at birth, then raised as girls, and then who chose to live as women.

You might think that’s clear enough but, for me, it immediately begs the question, “What’s a woman?”

From an ideological perspective, I immediately think of the famous quote by the feminist theorist Simone de Beauvoir, who said in The Second Sex, her seminal 1949 work of feminist theory:

One is not born, but rather becomes, a woman.

This was subsequently interpreted by the philosopher Judith Butler as making a distinction between sex and gender. Gender, she argued, is “an aspect of identity which is ‘gradually acquired'”.

If we accept gender is ‘gradually acquired’ – rather than a biological absolute – then it is not immutable, rather it is fluid and can therefore be subject to change.

If my interpretation is correct, then the phrase ‘women born women’, as it is used today by some second-wave feminists, appears to deny that gender is socially constructed at all.

Perhaps, then, the term ‘women’ is meant to be taken as referring to sex, rather than gender? After all, the two terms have long been used interchangeably by many people, so those who use ‘women born women’ so freely wouldn’t be alone in that misunderstanding.

However, I find that hard to accept when it comes from people who would have us believe they have an in-depth knowledge of gender issues by virtue of being feminists.

Babies are born, not women (or men, or any other gender)

After all, the separation of sex and gender is nothing new, either. As the historian Alice Dreger noted in her essay ‘Doctors containing hermaphrodites: the Victorian legacy‘, it’s been around since at least the early 1880s, if not longer:

Increasingly as the 19th century and then the 20th century progressed, medical and scientific men did all they could, conceptually and practically, to limit each and every body to a single sex. In the 19th century it wasn’t enough to just pick; the sex assigned had to be what they called the ‘true sex’ of the body. Every body was assumed likely to have a single true sex, male or female, a true sex that could be masked by ambiguous anatomy or ‘strange’ behavior, but unmasked by the able medical man…

The clinical problem was how to figure out what each person’s true sex was. The combinations could be quite confusing – breasts on men, beards on women, genitals that seemed to be a little of both or a lot of neither. Medical men fretted over cases in which so many traits seemed to contradict the ‘sex’ of other traits, traits including voice pitch, genitalia, hair distribution, fingernail quality, breast development, angle of the knees, quality of the gaze, sorts of desires. In fact, even though they never doubted that there were two, and only two, distinct human sexes, medical men of the 19th century had a devil of a time agreeing what sex was, or more specifically, on what should count as the necessary or sufficient signs of sex.

This idea, that there are only two sexes and two genders – they are are permanently fixed, with innate, essential differences between men and women – survives to this day in some quarters. But it underscores the more literal shortcoming of the phrase ‘women born women’.

Babies are born, not women (or men, or any other gender). Traditionally, very soon after birth, and following a brief inspection of the baby’s visible genitalia – which takes no account of reproductive ability – a binary sex is assigned by the midwife, obstetrician or other medical professional in attendance. “It’s a boy,” they’ll say, or “It’s a girl.” And, having been assigned a medically and socially constructed sex, the many cultural stereotypes associated with it will begin to be applied to the baby by family, relatives and society at large: the process of gendering to which we are all subjected, regardless of our own self-perceptions.

If both sex and gender are constructs, then where does that leave the proponents of ‘women born women’?

To my mind, this assertion simply doesn’t hold up to close inspection. For one thing, chromosome analyses – DNA tests – are not routinely carried out on newborn babies for the purposes of determining their sex. And what about people born with intersex variations? Many intersex babies who are born with ambiguous genitalia are subject to enforced genital mutilation for the express purpose of enabling society to pin a binary tag on them.

Do they grow up to become ‘women born women’? The Organisation Internationale des Intersexués’ Australian site lists 19 recognised types of intersex differences in its FAQ. By way of illustration that chromosomes don’t necessarily determine sex, this report in the Journal of Clinical Endocrinology & Metabolism makes interesting reading:

So it seems that differentiating on the basis of unobservable characteristics like chromosomes, or on one’s genital configuration at birth, or on whether one has a uterus and ovaries, doesn’t offer an indisputable definition of ‘women born women’ either.

The aim was always to simply exclude – based on what some people aren’t, rather than what they are

Demanding that ‘women born women’ be ‘reproductively female’ opens another can of worms: are trans men who have not undergone surgery included?

What about women who were assigned female at birth but grew up infertile, for whatever reasons?

And, of course, trans women who have undergone surgery are also sterile – does this exclude them from being considered ‘women born women’ (assuming that they would wish to be included in that category)?

In addition, ideologically, these viewpoints both seem to be so much at odds with each other as to render the term so flawed and unworkable to the point of being meaningless.

Why, then, does the term continue to have so much traction amongst some second-wave feminists? If we go back to the Wikipedia page I linked at the start of this piece, the section on the scope of the term offers a clue:

Womyn-born womyn policies center around the idea that women’s experiences under patriarchy are unique, learned, and transformative. Repeating Judith Butler’s assertions that gender is a performance, proponents of ‘womyn-born womyn’ spaces seek to create spaces wherein the enforced and policed performances of ‘girl’ in patriarchy can be reshaped outside of the presence of those not subjected to those limitations. Transgender women are excluded because they have not lived under the strictures of the enforced performance of ‘girl’, having instead been subjected to the performance of ‘boy’. Advocates of womyn-born womyn spaces argue that the experience of having been born and raised as a ‘girl’ under patriarchy is not one that transgender women share with womyn-born womyn.

Can you meaningfully quantify the way in which I’ve internalised society’s endemic sexism as compared to a cis man or a cis woman?

In other words, ‘women born women’ is an ideological construct of second-wave feminism, founded on pre-existing patriarchal definitions. As problematic as that may be – and make no mistake that it is – it at least tacitly acknowledges the constructed nature of gender, yet at the same time it seeks to remove the agency to change, as well as denying us bodily autonomy.

I will admit that I find it impossible to square those features with any feminism to which I could safely subscribe.

The aim was always to simply exclude – based on what some people aren’t, rather than what they are. That, in my opinion, is ciscentric othering writ large, gender policing by people who simultaneously claim to want to dismantle gender.

The latter part of that last Wikipedia quote is particularly interesting as it introduces, albeit tacitly, the subject of how we internalise patriarchal stereotypes of what is meant by ‘woman’, ‘female’, ‘man’ and ‘male’.

As a woman who is also transsexual, the idea that I’m not a woman because I wasn’t “born and raised as a ‘girl’ under patriarchy” is a very curious notion, to say the least. Can you meaningfully quantify the way in which I’ve internalised society’s endemic sexism as compared to a cis man or a cis woman? 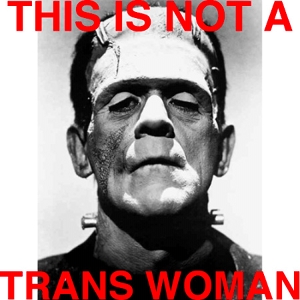 At the same time, I grew up in a family with a mother, father and sister – and I don’t believe that either my sister or I were subject to deliberate gender segregation, either at home or at school, apart from the same sexist brainwashing to which all children were subjected.

So I remain highly dubious about an exclusion clause based on whether someone was socialised as a boy or a girl, which is embodied in the term ‘women born women’.

And let’s not forget that the way in which I internalised (cis)sexism may very well have been hugely different from a cis boy, especially given the further variations in the way (cis)sexism was handed out to me on the basis of other people’s perceptions of me as an effeminate gay male.

All these things together lead me to think that all this emphasis on trans women’s pre-transition socialisation fails to understand some of the nuances of growing up trans in a cissexist supremacy and so is, or should be, the last nail in the coffin of the corpse of feminisms that exclude trans people.

That it isn’t, is profoundly dispiriting to me as a feminist woman who is also transsexual.

I do, however, take great comfort in the increasing numbers of visible and vocal cis women whose acceptance of trans women like me is helping us all work together to shape new inclusive and intersectional feminisms and safer spaces, in which exclusion rooted in cissexism and transphobia is already a thing of the past.

These are the feminisms of the here and now, and they sustain me during my bleaker moments. I am proud and blessed to know the kind, loving and committed women, my sisters and my friends, who are engaged in these feminisms and helping to dismantle such toxic concepts as ‘women born women’.