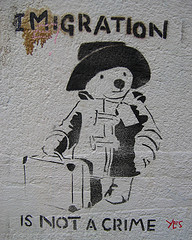 Families: only for the wealthy

On Friday the Guardian reported on outrageous proposals, expected to be announced by Theresa May this week, to change the immigration rules so as to severely restrict the ability of non-EEA nationals to join their British family in the UK.

The home secretary, Theresa May, is expected to confirm that she will introduce a new minimum income requirement for a British “sponsor” without children of up to £25,700 a year, and a stringent English speaking test for foreign-born husbands, wives or partners of UK citizens applying to come to live in Britain on a family visa.

Immigration welfare campaigners say that the move will exclude two-thirds of British people – those who have a minimum gross income of under £25,700 a year – from living in the UK as a couple if they marry a non-EU national. They estimate that between 45% and 60% of the 53,000 family visas currently issued each year could fall foul of the new rules.

In other words: the well-off can build families with anyone, regardless of nationality; the rest had better stick to Europeans, or be prepared to leave your own country to be with your partner and/or children. The JCWI has put together a dossier with illustrative cases of families who have managed to stay together under the existing rules, but would face immense challenges should these new proposals come into effect.

We have been here before. In 1969, Labour blocked the immigration of non-British husbands on the grounds that it could threaten the job prospects of indigenous men – a move that was both racist and sexist as it assumed that women did not enter the jobs market. In 1974, the law had to be changed because of the number of white women who were unable to marry foreign spouses of their choice. In 1980, the Conservatives restored a ban but qualified it in such a way that it would not affect most white women wanting to marry foreign men.

So this is likely just the same-old in new skin; still, certain particularly ludicrous aspects of the proposals merit examination. First of all, from which black hole of illogic has the income threshold been pulled? If £25,700 is the amount required to maintain a childfree couple for a year, why are benefits claimants expected to live on so much less than that? One can’t help but suspect that the figures expand or shrink, Alice-in-Wonderland style, to whatever is necessary to keep doors impassable and keys out of reach.

Theresa May has argued that British nationals “cannot expect the taxpayer to [support their foreign partners]”, but under her proposals, the income threshold needs to be met by the British national alone, without reference to the earnings, savings, job offers, job prospects or other third party support of the foreign national. It’s inhumane enough to require that only financially self-sufficient families should live together in Britain: but it’s downright incoherent to demand that the financial self-sufficiency arise solely from the means of the British party. What about British nationals who have caring responsibilities, and whose non-EEA partners are the main earners? What about British nationals who fail to meet the threshold and who are ill? Are they expected to choose between accessing the NHS and staying with their loved ones?

And what about British nationals with same-sex partners, whose relationships are not recognised – or whose lives and liberty might even be endangered – in the home states of their partners? Is Theresa May, Minister for Women and Equality, telling gay, lesbian, bisexual and queer Britons that to pursue their emotional lives with partners of their own choosing they may have to relocate to countries which enshrine violent homophobia into law?

The chill that I feel reading about these proposals is not merely academic. I am a Singaporean national married to a British man and currently living in Germany. I moved here from the UK to be with my husband as he pursued a particularly exciting career opportunity (we can debate the feminist nuances of such a choice at another time). I am also eight-and-a-half months pregnant with our first child. At the moment, we’re lucky enough that we would still be able to return to the UK together under the proposals, but I find it profoundly frightening and dehumanising that the government should make our right to do so conditional on the size of my husband’s pay cheque. It’s yet another illustration that the Tories only “support families” in the sense that they cherish an ideological fantasy built around a deeply classist, exclusionary vision of what they think relationships ought to look like. They are fully prepared to simply disregard (or, in this case, quite literally expel) any real families that don’t fit the mould.

The JCWI is urging people to contact Chris Bryant, Labour’s shadow immigration minister, to ask him to oppose these proposals.

Edited to add: Image shows Paddington Bear and the caption “Immigration is not a crime”. Shared by Dave Knapik under a Creative Commons license.