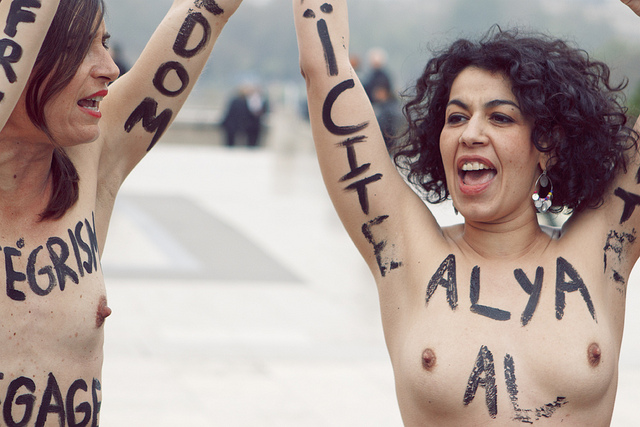 It was the start of Euro 2012 last weekend, with all the expected political ‘will they-won’t they?’ of UK politicians visiting or not visiting, endorsing or not endorsing the Ukraine’s government and who-really-cares-anyway since it’s all just a carefully aligned political mise-en-scene. So now seems like an appropriate time to consider my official feminist opinion of the bare-chested, latex-penis-wearing warrior-esque protest group, FEMEN.

I want to like FEMEN. I want to condone their painted nude protests and their unafraid and self-monopolised sex appeal. But the truth is, with all their partial-nudity in the snow and femme-fighter appearance, FEMEN throw up some interesting and at times awkward questions about feminism and the sociology of the female body in the private and public sphere.

Started in Kiev in 2008 by a group of university students, including Anna Hutsol, FEMEN are known for their trademark activism of staging political protests topless, with slogans and blue and yellow logo – the colours of the Ukraine flag – painted on their naked skin. They were formed primarily to campaign against and raise awareness of the growing ‘sex tourism’ trade (a euphemism for sexual slavery if ever I heard one) in their homeland and have recently been most active in bringing the public’s attention to this issue ahead of the football championship. They accuse the Ukraine government of intending to legalise prostitution to please foreign fans and of doing little to stop the ill-treatment of women in Ukraine, an issue which has hit the news recently with the case of Oksana Makar.

Along with their strip-to-subvert-patriarchy policy, the activists also wear a ring of flowers in their hair as a symbol of unmarriedness traditionally worn by ‘maidens’ in Ukraine. Along with the group’s spokesperson in the Sunday Times Magazine stating that they will put their beautiful bodies to good feminist attention-grabbing use before childbearing apparently ruins the aesthetic, this is a message that I’d rather not be affiliated with. However, FEMEN defend their use of partial nudity by claiming “This is the only way to be heard in this country.”

However, their overall aims “To develop leadership, intellectual and moral qualities of the young women in Ukraine” are somewhat more palatable and inclusive. Critics will argue that there’s nothing ‘moral’ about standing in front of a sex shop in Reeperbahn in a gimp mask and thong, but here I support Jessica Valenti’s stance on the myth that female morality is related to how much flesh she does or doesn’t show or how often she does or doesn’t engage in sexual behaviour.

FEMEN’s protests outside the Saudi Embassy and in a Paris square, both to raise awareness of women’s rights in the Muslim world, also suggest a naiveté and ignorance that weakens their message. Chanting “nudity is freedom” and protesting about some Muslim women covering up some or all of their body puts the group at one end of a scale of prejudice – the right not to cover up versus anyone’s right to adorn themselves as they wish. However, hearing criticism of FEMEN for just that -their right to go topless- also presents feminists with an uncomfortable dilemma. Are we to suggest there is a ‘correct’ amount of flesh to show? Are we saying “You must show your hair and your face. Don’t cover it up. That’s oppressive, isn’t it?! But for god’s sake keep your top on! That’s too much!”?

And does the suggestion that FEMEN’s rallies are ‘erotically flavoured’ work for or against their feminism? In a culture where women are often viewed as sex-dolls, is appearing to adhere to the female oversexed image an advantage or appeasement? 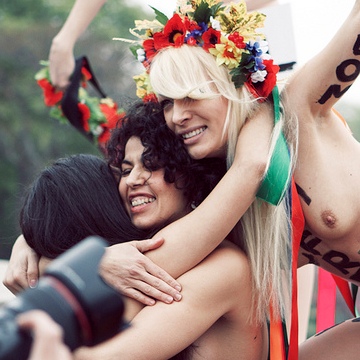 As well as some dubious image-politics, I would say FEMEN also have a reputation of being political pawns, rather than autonomous campaigners. In a world in which it seems no one is truly acting for their own making-things-better-for-humanity ethic, FEMEN unfortunately seem to have been used by political parties for their own ends.

Critics of FEMEN include Sitting on the Edge of the Sandbox, Biting my Tongue, whose evaluation of FEMEN argues: “Ukrainian feminists of more traditional orientation (yes, apparently, there are some) hate Femen. Femen perpetuates sexual exploitation and sucks all the oxygen out of press coverage of Ukrainian feminism.” So are we to conclude that their feminism is more attention-grabbing than other feminism and therefore shout it down? Or academically critique it down?

Having spoken extensively with other Ukrainian women, both those who are feminists and those who aren’t, the prevailing consensus seems to be a pejorative opinion of both FEMEN’s politics and mode of consciousness-raising: that breasts are not best when it comes to patriarch-shaming. Europe is watching, for sure, but what message about contemporary feminism are they getting?

Photo of FEMEN in Paris on 31 March 2012 by Joseph Paris, shared under a creative commons licence.