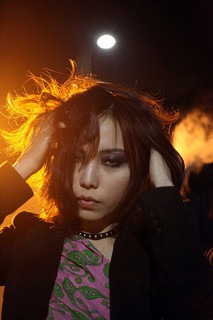 Hello and welcome to this weeks music paste up!

4AD describe the duo as making “lullabies for the club” which has a nice ring to it. ‘Belispeak’ is taken from the debut album Shrines which is released on 23 July.

In a similarly unsettling and eerie vein is this slice of self-described “Post-dubstep Chinese pop” from Miss Melody and Mobidextrous, entitled ‘Huan’ and concerned with the theme of alienation in big cities. It is sung in “an ancient Chinese language”, and the discussion on Youtube under this video would suggest that dubstep was a big thing in China last year.

I like the way high end fashion, street trends and urban alienation combine in this track. It doesn’t go for the ambitious fantasy dystopian world evoked in Purity Ring’s ‘Belispeak’, but despite the differing musical influences, would seem to share a similar spirit.

Last month I blogged about the debut single by White Blush, ‘Without You’, which I’ve since reviewed for a new collaborative music based blog. I thought the delicate intricaties of Carol Rhyu’s music may have been lost in what was a very crowded blog post, and I also like the B side to the single, ‘Wait’ so have included it here for your listening pleasure.

‘Til next time then….

Picture of Miss Melody by wiispa, used via a flickr creative commons licence