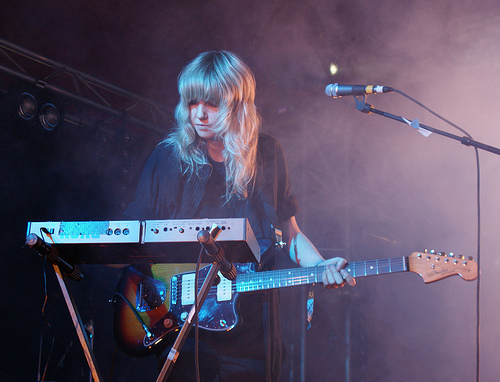 Hello and welcome to todays music paste up!

First up is the current single from Ladyhawke, ‘Black and white and blue’, a classic example of outsider pop which was released at the end of May. It’s taken from multi instrumentalist Pip Brown’s second album, Anxiety which is also out now.

Also out now is ‘Born to’, the first single from California born, Manchester based singer/songwriter Jesca Hoop’s new album The house that Jack built which is released on 25 June. Jesca is also touring the UK throughout June, and you can find out where she’s appearing and when by clicking here.

If you enjoyed the video to ‘Born to’, you can also download it for free from Jesca’s website.

Next up is Fallulah, and the distinctly summery ‘He’ll break up with you when summer comes’, a song that despite its early Norah Jones ish sweetness, also features some exquisitely rendered insults of ancient anglo saxon ancestry. Don’t say I didn’t warn you… This video was recorded live in Fallulah’s native Denmark.

If you enjoyed ‘He’ll break up with you when summer comes’, it can also be downloaded for free from Fallulah’s website.

Lastly, this is the debut single by Connie Lim, which has just been released in the US on the Nashville label DigSin. Judging from her online biog, Connie is a bit of a musical prodigy, penning her earliest piano compositions at the age of eight.

Although not technically released in the UK, the single ‘LA City’ is free to download from Connie’s website.

‘Til next time then….

Image of Pip Brown, aka Ladyhawke, performing at the Underage Festival, London in 2009 by KatieBlench. Used via a flickr creative commons licence.