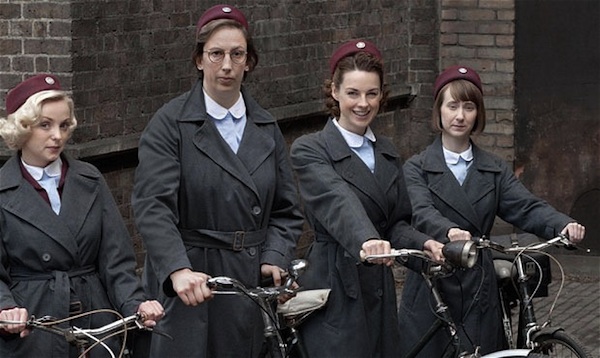 Call the Midwife, a historical drama about childbirth set in 1950s London, was an unexpected ratings smash last winter. It’s currently being repeated on Thursdays on BBC1. Emily Kenway examines its success as a mainstream drama with an, almost exclusively, female cast.

“Midwifery is the stuff of life” Vanessa Redgrave’s worldly-wise voice intones as a young woman cycles through the backstreets of London. This is Jenny Lee and she is on her way to Nonatus House where she will live with a small group of nuns and midwives, administering to the colourful East End poor of 1950s London.

Jennifer Worth’s trilogy of memoirs, beginning with Call the Midwife, have sold almost a million copies in the UK since they were published in 2002. Worth herself was an interesting woman (she died in May last year); after midwifery and a stint as a ward sister, she left the medical profession and taught music for twenty five years, singing in choirs across Europe. As if that wasn’t quite enough achievement for one lifetime, she then turned her hand to writing and produced these three highly acclaimed memoirs.