Sex, choice and control: what violence has to do with family planning

It’s sort of unbelievable that millions of women and girls around the world are having to have sex and bear children when they don’t want to. The UN and others estimate that at least 200 million women don’t currently have access to the contraception and family planning services they want and need. This is a pretty conservative estimate, as it only counts those women who are married or ‘in a union’, which is defined as ‘a man and a woman regularly cohabiting in a marriage-like relationship’. So, ageist (doesn’t include adolescent girls, even though data shows they are in desperate need of family planning services), homophobic, and privileges ‘marriage-like relationships’ over other kinds of sexual relationships as well as a particular view of marriage presumably (what is ‘marriage-like’?).

Still, if we managed to provide family planning services to this recognized 200 million women who are ‘in need’, that certainly would be something to be happy about. To this end, the UK Government and the Bill & Melinda Gates Foundation are hosting a global summit on family planning on 11 July to galvanize the international community into meeting the needs of at least the poorest 120 million of these 200 million women (where poverty is about your country’s GDP, so does not include very poor women living in the UK, for example). And not a moment too soon, given the recent outcomes of the Rio+20 Summit where *already internationally agreed* reproductive rights were systematically written out of the final commitments all our governments signed up to. The push to roll-back our reproductive rights is apparently sweeping the globe and operating at international decision-making tables too.

And this is where the real challenge lies. The focus on family planning to date has largely circled around technocratic solutions to what is at heart a problem of power. It is certainly true that a lack of family planning services and supplies in the global South prevents women and girls from being able to access the contraception they need. If there’s no health clinic, or it’s out of condoms by the time you get there, then that is a gap that obviously needs addressing, not least because all women and girls have the right to access family planning and contraception. So it will be great if world leaders could get on top of that.

But all the condoms in the world are of no use to women and girls when they have no control over whether and when they have sex, or under what circumstances they have it. The reality for millions of women and girls is that gender-based violence constrains choice. 1 in 3 women directly experiences violence at least once in her lifetime. And I would argue all women and girls are affected by violence, with the threat of violence forming the backdrop against which we take our day-to-day decisions about what we wear, where we go, and how we go about living our lives – including whether and how to resist violence against us. Rape is rampant, and not just in war zones. National health surveys from around the world confirm that marital rape is all too common; more than 2.6 billion women live in countries where marital rape is still not even illegal.

In an effort to highlight how violence and women’s unequal power relative to men blocks women and girls from being able to negotiate the terms of their sexual relationships, including insisting on condom use for example, ActionAid has just published a new report called Sex, choice and control: the reality of family planning for women and girls today (pdf) (disclosure: I co-authored the report and work at ActionAid). It interviews Donnah, Evelyn, Janneh and Hadia, four women in Liberia, Tanzania and Uganda, about what choices they’ve been able to take – and which not – about their reproductive lives, and demonstrates why the upcoming family planning summit absolutely must address gender inequality and violence against women if it has any hopes of achieving actual change for women (see image below). 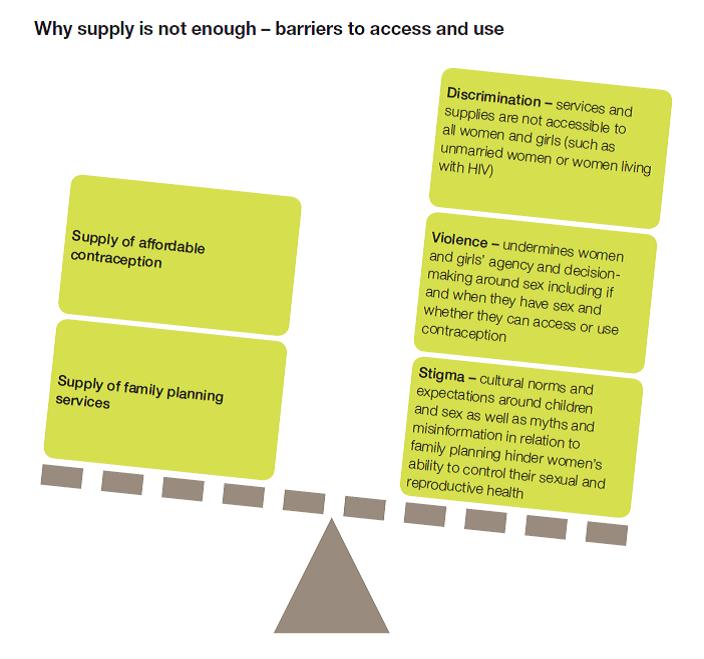 Some policy makers might think that addressing gender inequality and tackling violence against women and girls is too complicated to cover at international meetings like the upcoming summit, compared to agreeing to spend x billion US dollars on condoms. This is not only untrue – it is just as easy to commit to spending x billion US dollars to tackling violence against women and girls and there are plenty of women’s rights organizations that can advise on how to deliver this effectively – it also misses the point. If the idea is to improve women and girls’ reproductive rights by ensuring they have more choice and control over their reproductive lives through access to family planning, then being able to actually use the family planning services that are being provided is evidently key.

The report outlines some of the practical steps that the governments, donors and civil society representatives that are coming to the summit can take to make this happen. What we need from these representatives now is political will. The global meeting is unprecedented and is poised to make a radical difference to 120 million women’s lives. But only if it is responding to the realities these women are living. So, come on representatives! Make. It. Happen.