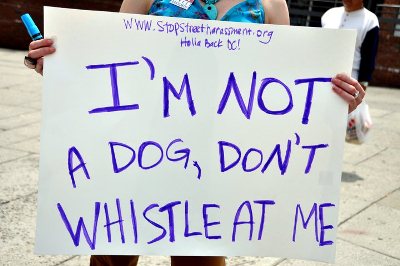 Farrah Kelly explores how street harassment affects girls and their attitudes to harassment in later life.

This is a guest post by Farrah Kelly, a student at the University of York. She is a student media editor, and writes a personal blog here. She can be found on Twitter, @farrahkelly.

I used to be followed home. Not from work, nights out, or even university; but from school, wearing a uniform. I was fourteen.

I was trailed by the same guy each time. He was roughly five years my senior, and well aware of how intimidated I was by him. He was a friend of a friend who’d taken a bit of a shine to me and, over time, trying to avoid him became a regular aspect of my journeys home.

I’d try to outpace him, but he was happy to follow from a distance when he didn’t manage to get a grumbled conversation out of me. To lose him, I’d wait at the end of my street feigning phone calls until he got bored and wandered off- solely so he didn’t find out exactly which house I lived in. If he’d known precisely which door to wait by, I could’ve been much more vulnerable home alone than I was walking around in broad daylight. I confided in our mutual friend, who simply insisted that he was “a nice guy really”, and that he just “really liked me”. A resounding “get over it”, then.

After a while, I stopped noticing him around. He’d taken the hint, and I was victorious. That was, until I saw him trying to take pictures of my younger sister and I on our way to the shops. The reality of how sinister this guy was hit like a train.

What’s concerning is I’m not alone. In discussions with other young women, many unwanted encounters took place while we were all still worried about homework deadlines. One friend was catcalled by two separate cars of older men on her way to a 15th birthday party. Another was walking home from school when a group of older men pulled up alongside her and decided to snatch her mobile out of her hands so they could gain her phone number. She received inappropriate calls for months afterwards.

Perhaps this is a factor in why the results of the End Violence Against Women (EVAW) survey are puzzlingly lower than what we all expected. 4 out of 10 women experiencing street harassment seems a bit of an understatement. The survey doesn’t include any participants younger than 18, but overwhelming anecdotal evidence suggests that a great deal of sexual harassment occurs well before the age of legal consent.

The social greying of what constitutes harassment has ultimately led to an acceptance of unwanted sexual attention in society. Being wolf-whistled at, being chased, being groped. It’s become a daily encounter for women, and we have become so accustomed to it, it’s considered the norm. This confusion over what we count as unacceptable has meant younger women have become victims.

At no point during my encounter with my unwanted chaperone did it occur to me that I was being sexually harassed. It wasn’t until I was worried for my sister’s safety that it became clear how unnerving my situation was. All of my friends took a moment to realise that what they had experienced was highly inappropriate. We’re all used to it, well before we’re even of age.

Accepting such extreme harassment at a young age contributes to how we later view how we’re treated in public. If we’re shrugging off being followed home at fourteen, we’re not going to see being mauled in a club at twenty, or being offered an old man’s lap as a seat on a crowded train as a big deal. If something is detrimental to how safe we feel, or we are made physically vulnerable, we should be acknowledging it for what it is, and reporting it. Yet we’ve already been conditioned to accept abuse, so it’s little wonder that we find it difficult to draw a definitive line between flattery and harassment.

We need to recognise that harassment begins at a much younger age than 18. We need to educate young girls on identifying and reporting it. We need to start seeing street harassment for what it is; sinister, unnerving, and dangerous. And we need it to stop.

Photo at the top of the post is of a placard that says “I’m not a dog, don’t whistle at me”, taken from the Stop Street Harassment website.