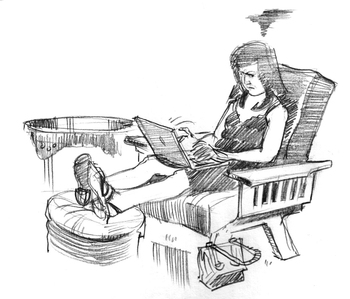 An apology to Darren Elmore and all the men like him

A guest post by Lorrie Hearts about the aggression she was faced with when challenging rape jokes and those who tell them.

This post contains sexually violent, disablist and misogynist language and speech which some readers may find triggering.

Over the past week, Twitter has been buzzing with talk of whether comedian Daniel Tosh, who suggested that a heckler should be gang-raped, was attempting to silence a woman with threats of sexual violence or simply having a good old knee-slapping joke.

My interaction with one Twitter user on the subject has helped me to see that my objections to rape jokes are not only tedious but are actually actively victimising some men.

This is my apology.

“I think that woman who was so upset at Daniel Tosh is just ovary-acting. #ImSorry”

Rather than allowing Darren space to enjoy his witty quip, I challenged him on the joke and was rewarded with a response branding me a “humorless asshole”.

Although I didn’t realise it at the time, Darren was right. If there’s one thing I’ve learnt from the path our interaction took later, it’s that the only thing funnier than rape – and the threat of rape – is women’s reactions to those things. #Bitchesbecrazy, as one of Darren’s supporters put it!

To give Darren his due, he did try and give me a heads up of what might be around the corner for me, pointing out that the woman Tosh ‘joked’ about, “interrupted a comedy show, made a scene and is being an asshole about it”.

Now, you have to admit, he’s got a point. If you call out a comedian for a rape joke and he tells the audience that it’d be hilarious if five of them raped you, there’s no need to be an asshole about it. Basically, you’d kind of be asking for it. Prophetic words, too, as it turned out.

So, maybe I was being a bit of an asshole: I told Darren that I didn’t think the woman in question was wrong for being upset. I figured that, because I wasn’t swearing at Darren or using abusive language, he wouldn’t have that much of a problem with my comments.

Wrong again. Darren got angry and abusive, using an interesting mix of disablist language by referring to me as a “fucking idiot”, telling me I had “serious mental issues” and finishing with “Fuck you all”, before blocking me.

Not grasping just how much hurt I’d caused Darren by calmly discussing rape jokes with him, I was surprised when someone pointed out that, although I hadn’t responded to Darren’s last comments, he was now claiming that I had not only insulted him but “threaten[ed] [him] directly and non-ironically.”

Furious that he was lying about me, I lost sight of the fact that I’d brought the situation on myself. In an unwise move, I proceeded to actually tell people what he’d said and complain about his comments. Unbelievably, I even went as far as asking Darren to prove his claims when, in reality, I should have understood that his response was not only rational, but justified.

Like any sensible man, Darren ignored my tweets and blocked anyone who challenged his version of that morning’s events. Later in the evening, he took the only sensible course of action left to him: he posted my Twitter information on his Facebook and laughed off the troubles of the day in a hilarious conversation with a friend about how he’d love to set us up on a ‘rape date’.

In a comment that got a thumbs up and a “Preach, preacher!” response from Darren, his friend ‘Malfeasance Angst’ quipped, “”Double fuck her. Stupid cunt is taking this much time away from the real issue of it fucking shameful if she really fucking cared she would be at a hotline somewhere putting her twat where her mouth is.”

Again, I made the huge mistake of sharing this information on Twitter. Completely misunderstanding the comments, I actually felt threatened and violated to see two grown men discussing me in the context of rape and using gendered, sexually violent insults about me. And so, I continued to complain. 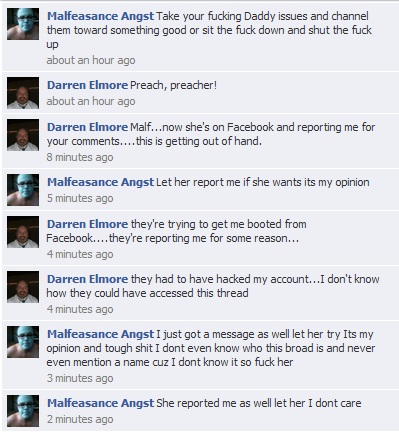 What seemed to me to be a man ticking off the “How to silence women 101” checklist was in fact the result of my refusal to accept my lot as a woman. I have learnt that, if you challenge a rape joke, you should expect to be targeted with sexual, disablist and dehumanising language.

As I watch Darren continue to post comments about “crazy” me and my vagina (he’s “uncomfortable even knowing [I have] a vagina”!) on his social media feeds, I realise the detrimental impact my actions have had. Darren Elmore, like Daniel Tosh, simply wanted to joke about rape threats without being challenged by the people these jokes affect most. I not only stood in his way, but continued to protest when he did his best to silence me.

[The main image is a handdrawn woman with her feet up using a laptop while looking very annoyed. It was taken by r8r and is used under a Creative Commons Licence]