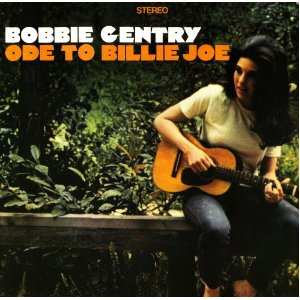 Song of the day: Bobbie Gentry – Ode to Billie Joe

The enigma of the song ‘Ode to Billie Joe’ is at the heart of its appeal. The commentary used alongside the above clip reports that Gentry described the song as “a study in unconscious cruelty”, but there remain unanswered questions about the songs subject matter as well as its studied and subversive indifference of tone. Just exactly what was thrown off the bridge by Billie Joe and the songs narrater the day before he jumped to his death? This has become one of those recurring questions in popular culture. It’s probably up there with just exactly what did Aunt Ada Doom see in the woodshed in Cold Comfort Farm and Gentry’s response was similar to Stella Gibbons’: She wasn’t telling.

Such was the speculation about the song, and the question of what was thrown from the bridge, that it inspired the 1976 film Ode to Billy Joe which did provide answers, albeit perhaps not necessarily the expected and speculated ones.

Gentry has long retired from public life, and this disappearance has enhanced her mystique. She remains a touchstone for a number of female musicians, including Reba McEntyre, Beth Orton and Gaggle amongst others.

Video commentary: This clip shows Gentry performing the song ‘Ode to Billie Joe’ live on TV. Her performance is intercut with shots of her walking around the geographical landscape described in the songs narrative.