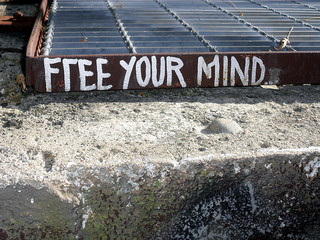 Song of the day: En Vogue – Free your mind

“Prejudice: Wrote a song about it, like to hear it? Here it go”

Soully girl group En Vogue were marking something of a departure from their previous recordings when they unleashed the loud and proud ‘Free Your Mind’ on an unsuspecting world in 1992.

A rock orientated track, lyrically the song confronts prejudice on a number of levels, using a number of scenarios, and it confronts both white on black and black on white prejudice. Some of the examples given revolve around fashion and society’s expectations of women:

Whereas some revolve around the stereotype that black Americans are poorer than their white counterparts:

“So I’m a sista, buy things with cash, that really doesn’t mean that all my credit’s bad.”

and stereotypes about shoplifting:

“I can look, without being watched.”

The video itself is an example of top of the class soul divadom, but it also mixes in rock imagery like stage diving, suggesting that the desire was to break down the bounderies between rock and soul.

The sexual politics of the song, and its mixture of soul and rock saw the song take on a second life many years after its initial success when it was picked up by a sort of post riot grrrl diaspora in the UK, who adopted it and played it at club nights such as Get In! and Shake-O-Rama! in Manchester.

Picture of some graffitti, reading ‘Free Your Mind’ in Chicago. By TheDarkThing, shared via a flickr creative commons licence

Video commentary: The official video made to accompany ‘Free your mind’ is a raucous take off of a catwalk fashion show. The band strut up and down the catwalk while singing. A rock band are also shown performing, and photographers take pictures as the audience grab at En Vogue from the side of the stage. The video uses imagery from fashion and rock concerts (the band, stagediving)