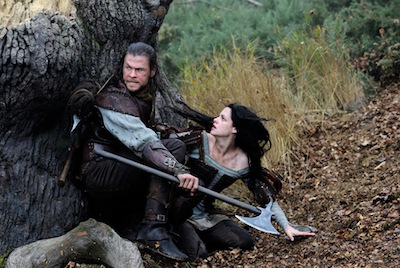 The fairytale Snow White is the subject of not one but two cinematic adaptations this year.

Rupert Sanders’ Snow White and the Huntsman treads a darker path to Tarsem Singh’s Mirror Mirror. Director’s first full-length film is a strong debut; all the expected archetypal images from the familiar story are there, but Sanders also delivers beauty, truth and power.

Unlike the original, the nub of the film is not the beauty of the title character: her looks do not power the film as they do the tale. Chris Hemsworth‘s Huntsman even says: “Don’t flatter yourself” to Snow White as he tears her hindering skirts so they can get through the treacherous forest. And yet, you will spend a significant number of the 127 minutes drinking in Kristen Stewart from every angle, intimately shot, wide eyed and as jet, pale and ruddy as the ‘fairest of them all’ could be.