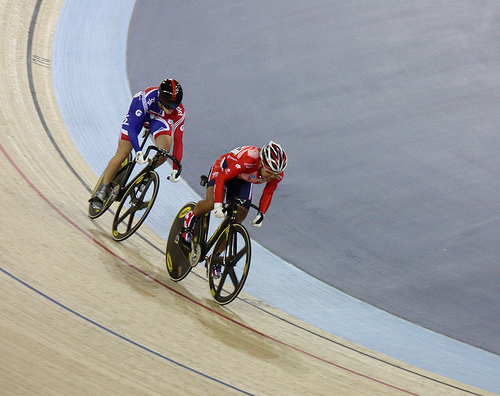 Victoria Pendleton MBE is a British cyclist gunning for gold at the upcoming London 2012 Olympic Games. She already has a gold medal from the previous tournament in Beijing, plus nine World Championship victories, and a string of European Championship and Commonwealth titles. She also has a nice bum. Where this particular fact ranks in her list of achievements is, increasingly, a matter open for debate.

Don’t believe me? Well, I’ve seen it! She showed it to me! Me and the rest of the Daily Mail Femail section readers. We all declared that it was indeed a nice bum. “She does have a magnificent bum!” said Mark from London. Too right, Mark. Victoria herself agreed, “I’ve been told I’ve got a nice bum.” I would never dispute the niceness of Victoria Pendleton’s bum. Never. I would defend it to my very death. What I do dispute is this recent trend of female athletes completely undermining their talents and achievements by donning a pair of lacy knickers, or indeed, nothing at all, to pose for photo shoots in which they appear to giggle and simper and say things like, “I’ve been told I’ve got a nice bum.”

Victoria, who stands naked whilst brandishing a bike wheel for the latest issue of GQ, is far from the only one guilty of this. Also posing naked in the magazine is volleyball player Zara Dampney. Unfortunately for Zara, her pictures do not receive the praise that Victoria’s enjoyed. “Zara could do with a breast augementation [sic] “, Dr.Plastic comments, whilst Justine from Herts summons all her powers of articulation to simply state, “someone stole her tits!!!!!” [sic]

At my last look, Justine’s comment had 109 red arrows, the indicator that other readers use to display their displeasure. Sadly the one who should be red arrowed is Zara herself for allowing these comments to arise in the first place, caving to media pressure and promoting herself to be consumed as nothing but a sexual object to the delight of tabloids such as the Daily Mail.

The story detailing athlete Jessica Ennis’ recent photo shoot (is this an obligatory thing now?) is headlined, “Olympic golden girl Jessica Ennis shows off her killer figure in glamorous photo shoot”. This comes after controversy surrounding comments about Jessica’s weight, supposedly made by a high-ranking official in UK Athletics. Naturally many athletes and other officials have come to her defence; and yet, I wonder why she chooses to further promote herself to a male gaze after already falling victim to it. Indeed, when one googles Jessica Ennis, the first option listed is, “Jessica Ennis bum”, followed by “Jessica Ennis fat” and “Jessica Ennis hot”. At the bottom of the list is “Jessica Ennis facts”. It is deeply sobering to think that this great athlete’s achievements have been ranked as a measly fourth option of interest compared to three above discussing her image. With a media hellbent on bombarding the public with these images, we really have to question whether Jessica’s decision to take part in the photo shoot was a consequence of her choice, or, simply, public and media expectation.

One could argue that the athletes have subverted these expectations to their advantage, defying sexualisation and using their nakedness to celebrate the body as an instrument of their craft. Posing naked can be empowering: the recent sculpture of disabled artist Alison Lapper’s pregnancy is a great example of this, a celebration of the power of the female body in complete defiance of its sexualised past. The British female athletes also have this ability to display the sheer power of the female body in a different way, contrasting its strength and discipline with Lapper’s celebration of its life-giving qualities. And yet Victoria’s inane comments, followed by the inane comments of Daily Mail readers, only further enforces the sexual undertone. All that these athletes have chosen to display is their ability to please men by posing like Katie Price, a woman who has made a living from it.

The most blatant example of this was the calendar released at the start of the year in which female members of team GB posed in lingerie “for charity”. I don’t know which charity benefited from these women posing in their underwear but can only presume it is one in aid of the victims of a possible knickers factory explosion. Athletes such as Francesca Snell pose in bondage-esque outfits to the delight of men who suspected all along that looking pretty is the only thing women are really good for. These women are role models to millions of young girls interested in sport – what kind of message does this promote to them? That the pinnacle of success is to be ogled at?

These women have worked incredibly hard and are a credit to every female out there in terms of what they have achieved in their field. They should be celebrated so, please, ladies, don’t make me have to condemn you. Keep your kits on this summer and show us that you should be celebrated for your talent, not your bums, nice as they are.

This blog post is by guest blogger Rebecca Hussein. Since leaving university, Rebecca spends most of her days roaming the streets of Dagenham tearing at her hair. She hopes to pursue a career as a freelance journalist, whilst juggling her demanding schedule of eating cereal from the box and watching Deal Or No Deal.