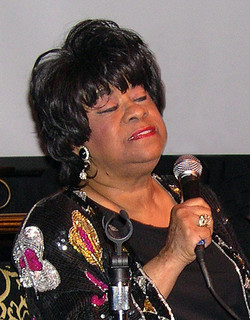 Song of the day: Ruth Brown – (Mama) He Treats Your Daughter Mean

Ruth Brown (1928-2006)initially performed ballads before switching to R&B, a style in which she was so successful she was nicknamed ‘Miss Rhythm’.

This clip of Brown dates from 1955, and at just under two minutes long it’s an example of how R&B and rock’n’roll records were made on the principles of short, fast and furious. This is a ‘hell hath no fury like a woman scorned’ song with a difference: The woman is not sobbing, she is raging. Not only is she raging, but she is confessing all to her mother, which as songs go, is definitely on the unusual side. The song remains one of Brown’s most enduring hits.

Brown is also credited with the early success of Atlantic Records, to the extent that the label was known for a while as ‘The house that Ruth built’. Little Richard also acknowledged a debt to Brown.

She took a career hiatus in the 1960s, but returned in the ’70s with dual careers in music and film.

Later Brown would campaign for the royalties she and her fellow R&B performers were owed, and won. According to Brown’s obituary by Michael Hurt in Mojo in February 2007, “When the smoke had cleared, Atlantic had squared up with 35 of their acts, Brown included, and contributed two million dollars to spearheading the royalty reform organisatoin, the Rhythm and Blues Foundation.”

In 1988 she appeared as DJ Motormouth Maybelle in Hairspray and in 1993 Ruth Brown was inducted into the Rock’N’Roll Hall of Fame.

That her death in 2007 didn’t attract more coverage is saddening as she deserved to be remembered, not only for her music and her acting, but for her campaigning work.

Video commentary: The YouTube clip above is of Ruth Brown performing ‘(Mama) He treats your daughter mean’ on US TV in 1955. The clip is in black and white, Brown is shown performing with a full backing band and she is also playing tambourine.