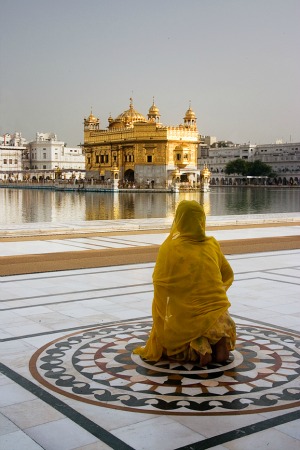 Two stories about the actions of a minority of Sikhs in Britain have been published in newspapers this week. The first is about some Sikhs forming an alliance with the English Defence League over the alleged sexual assault of a Sikh woman by a Muslim man. The second is about a group of Sikhs occupying a Gurdwara (a Sikh place of worship) to prevent a wedding taking place between a Sikh woman and a Christian man.

As well as highlighting different interpretations of religion, these stories show how some Sikh men wish to control Sikh women. Sikhism believes in equality, but Sikh women are not always on an equal footing. The people involved in these incidents claim the are doing the right thing but I believe these actions have left Sikh women worse off.

Collaborating with the EDL to protect the honour of Sikh women is extreme. Sunny Hundal wrote about the history between the Muslims and Sikhs which could explain why some Sikhs met with the EDL. But I cannot see how this alliance will lead to justice for the Sikh woman involved. Instead using the alleged assault as an excuse to express their hatred for Muslims, these Sikhs should be working with the police and supporting the woman in her fight for justice. Sunny Hundal mentions a leaflet which urged Muslim men to seduce Sikh woman to convert them to Islam. I remember at the time how Sikh girls were confined to their homes by their relatives to keep them away from Muslim men and I do not want the same thing to happen to another generation of Sikh teenagers because of this alleged assault.

Opinions differ on whether a non Sikh can have a religious Sikh wedding, but it is significant that the bride was a Sikh and the groom was a Christian from a West African background. Weddings between Sikh men and European women do happen these days with relatively little fuss. However, because the Sikh was a woman who wanted to marry outside the faith and to a man of West African origin some Sikhs who lived nowhere near the Gurdwara felt it had to be stopped. This is effectively telling Sikh women to marry other Sikhs or else face harassment and intimidation.

Both incidents show that some Sikh men still want to control how women should lead their lives how they use the events in a woman’s life to pursue their own agenda. It frustrates me how some Sikh men chose to ignore real issues such as female foeticide and domestic violence yet use extreme measures to protect their interpretation of honour and faith when it is threatened by those not belonging to their own community. Many Sikhs are appalled by the actions of a minority in their community and I hope they care enough to help change the attitudes of this minority.

Picture shows a woman praying outside the Golden Temple in Amritsar. Picture is by Malosky, used under a Creative Commons License.