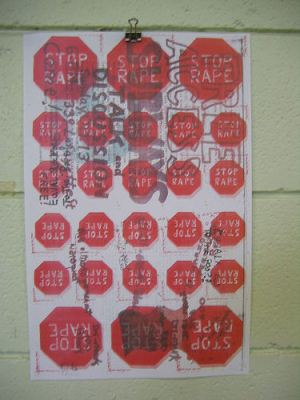 I was in my local Tesco Metro the other day with my husband, browsing the drinks aisle, when I came across an energy drink I’d never seen before. It’s a brand called Black Energy, and emblazoned across the can was a huge photograph of Mike Tyson’s face. It would appear that Black Energy have chosen Tyson as their new face of the drink, and Tesco are happily endorsing this, despite Tyson’s conviction for rape and reported history of spousal abuse. As if this wasn’t bad enough, the advertising campaign features Tyson surrounded by sexy young women and appropriates the concept of black power for the purposes of making profit.

After posting about this on Facebook, I noticed a comment from a man that was something along the lines of “He’s served his time, nobody’s calling for the end of David Dickinson’s career.” Quite aside from the fact that a conviction for rape and a conviction for fraud, as was the case with Dickinson, are two very different things, this comment angered, hurt and disappointed me because it shows just how unimportant rape victims’ and survivors’ experiences are to the general public, and how misogyny ingrains itself in society even in those who are good people.

Tyson has served his prison sentence, that’s true. But somewhere out there is a woman who is still serving her sentence. There are thousands of women – and men – who still wake from nightmares, memories of a person or people doing the unspeakable to them. What are we telling Tyson’s victim, and the other one-quarter of the female population who have suffered rape, when we say that someone like Tyson ought to be forgiven his violent past and allowed to live in the public eye as a celebrated man?

The rate of conviction for rape in this country is less than six per cent. That’s only the reported ones, and it is widely known that the vast majority of rapes in the UK, and abroad, are not even reported. Little wonder that women don’t bother to report the horrific crimes perpetrated against them, when the world is telling them that their attackers will be forgiven anyway. Why would any woman report her rape when she is told that her attacker should be celebrated and that when she – the victim of these crimes – complains, she will be silenced with the attitude that he has served his time, if any at all, and that she needs to shut up and stop complaining?

By supporting a man like Tyson, by perpetuating the attitude that simply because he has served a (far too short) prison sentence for his crime, then that crime ought to be forgotten about, we are telling rape victims that their experiences don’t matter. I accept that a rapist could perhaps be rehabilitated, but I refuse to even entertain the idea that he can or should be forgiven for a crime that will probably affect his victim for the rest of her life.

Sign the petition asking Tesco to withdraw the drink.