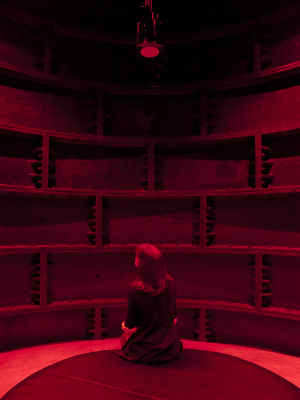 From the margins to the mainstream

London’s Tate Modern has opened the doors on its newest venture: The Tanks, an exhibition space that is underground, created from the oil tanks of the Bankside Power Station. Once intended to hold a million gallons of oil, The Tanks are now home to live art, performance, film works and installation art, becoming the world’s first permanent museum galleries designed for this purpose.

The space has been designed by Herzog & de Meuron, the Swiss architects who oversaw the renovation of the old power station into the Tate Modern, which opened in 2000. Their vision has, from the beginning, included the oil tanks. The found space, Herzog explains, will form “the roots of something to come” – a larger build, raising the south side of the museum to include 10 new floors, a development they hope to complete by 2016. The Art in Action festival is launching The Tanks as an exhibition space, using the opportunity to show off the innovative ways the space can be used for performance art.

As I entered The Tanks, I was immediately conscious of their scale, with high ceilings and a wide downward path leading off to other rooms. The concrete walls create the sense of being in a bunker, somewhere private and subversive. At the entrance, you are greeted with a sign asking: “Can artworks that exist only in the moment, or through participation, be collected, preserved and displayed alongside other museum objects?”

A bird’s-eye-view film of the living quilt was displayed on a large wall. I sat on the floor to watch it, comfortable in a space that I felt was mine to determine

The exhibition is the answer, approaching the temporary nature of performance art and attempting to pin it down without limiting its effect. Suzanne Lacy’s ‘The Crystal Quilt’ and Lis Rhodes’ ‘Light Music’ are on display for the full 15 weeks of the Art in Action Festival, and are displayed in connecting space. I had the privilege of meeting Lacy; my interview with her can be found here.

Lacy’s piece, an exploration of attitudes towards elderly women, is broken down into three sections, including a circular iron-clad room with only a cushioned chair and a sound system. Forced to sit facing the walls, I found myself undistracted, connecting fully with the soundtrack of personal accounts of ageing. The project involved 300 elderly women coming together, sitting at tables that created an ever-shifting quilt pattern while sharing their stories of life as an older woman. A bird’s-eye-view film of the living quilt was displayed on a large wall. I sat on the floor to watch it, comfortable in a space that I felt was mine to determine. The documentary discussing the project shed more light on Lacy’s artistic intentions, and spoke of the cultural loss that comes from the silence and invisibility of the elderly. A trip to The Tanks is worth it, if only to see Lacy’s work. 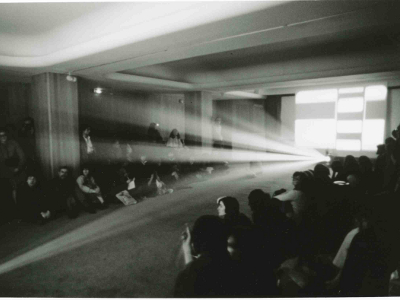 Following through to Rhodes’ piece, a cinematic environment addressing the absence of women composers, the audience becomes part of the art by stepping between two projectors, ensuring every screening is different. It was enjoyable to watch as people interacted with the projections, as the silhouettes seemed to highlight the absence Rhodes was engaging with. The thinking behind the piece was fascinating, but as a piece of art it was necessary to know her intentions to understand and appreciate it.

Sung Hwan Kim’s commissioned work looks at relationships between women and between girls in Korea. The audience moves between screens, once again participating in the artwork. The films are bizarre, with the soundtrack of one film dominating the room, but totally captivating. While the reason for the reflective objects placed in an around the video screens still eludes me, the exhibition as a whole was thoroughly enjoyable.

Perhaps the most interesting space in The Tanks, though, is the live room, which will feature a different live performance each week of the festival. A vast room with remarkable acoustics, when I visited, an architectural dance piece by Anne Teresa De Keersmaeker played on the space, with the hisses and slide-steps of the dancers audible below the music of Steve Reich. The minimalist and abstract dance wasn’t what I’d usually enjoy, but the technique and style was fascinating. However, it remains to be seen whether the space will work for other forms of live art, as there is certainly the risk that performances will be dwarfed by it. [

Taking artwork that has predominantly been politically underground and exhibiting it underground is a clever move, allowing the audience to maintain the sense of subversive action while making space for such action in the mainstream

As part of the press viewing, the curators and directors came together for a conference, answering questions and talking about the new space. Ruth McKenzie, director of the London 2012 Festival, the cultural side to the Olympics, was enthusiastic about The Tanks development, remarking that the “might of the Tate would embrace performance art from the margins” in order to live up to the once-in-a-lifetime tagline of the Olympics.

Chris Dercon, Tate Modern’s director, has bigger ideas. Declaring that “we are already, at Tate, beyond the Olympics”, Dercon was refreshingly political. He used the opening of The Tanks to call out corporations who do not work with the public. “It is important,” he explained, “for the audience to be given a voice.” Circular rooms and interactive art are steps towards this, forming what Dercon refers to as “the art of with”, rather than something that is “done at us”. There is, apparently, an increasing desire in the public to participate, to blur the distinction between audience and artwork, something I can definitely relate to. Arguably, this desire is nothing new. Performance art has been recognised as an art form since the 1960s, and indeed some of the work featured in The Tanks dates back to the 1980s. 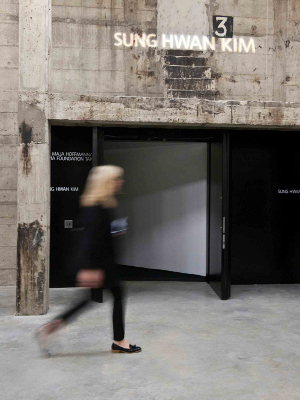 For curator Catherine Wood, the intention of the festival is to recognise the history of the art form. “This programme is all about the older generations speaking to the younger generations, connecting the live with the past. Women like Lacy and Rhodes are at the very roots of performance art.

“We made a deliberate decision to invite female artists to use The Tanks – there’s only one male artist this week, and his work is about women!”

This attitude is exciting to hear from a curator at an internationally acclaimed art museum, as is the active decision to celebrate performance art, a form that a great many female artists practice and, perhaps because of this, a form that has long been on the margins of the art world. Dercon also acknowledged this issue, declaring The Tanks a space that “challenges the male dominance of art museums”, while curator Stuart Comer described the programme as “art based on absence, addressing the lack of visibility of women in many arenas.”

I feel very hopeful about The Tanks. Taking artwork that has predominantly been politically underground and exhibiting is underground is a clever move, allowing the audience to maintain the sense of subversive action while making space for such action in the mainstream. While some performance art may not translate to a permanent setting, the works chosen are continually changing, translating their temporary nature into the constant space. Seeing feminist art at the fore of a Tate project is exhilarating, and long overdue. ‘Biological politics’, a phrase Dercon used to describe the live art prometed by the Tate, but which can also refer to the politicisation of the (female) body, has been a part of the feminist movement since day one – now at last, through performance art, it is becoming an integral part of the Tate’s movements into the future.

The first and third photos are The Tanks at Tate Modern, from Tate Photography. The second is Lis Rhodes’ ‘Light Music’, Paris 1975, copyright Lis Rhodes.

Caitlin Hayward-Tapp is a performance poet, music lover, activist and free hugger. She is fond of cats, pina coladas and getting caught in the rain