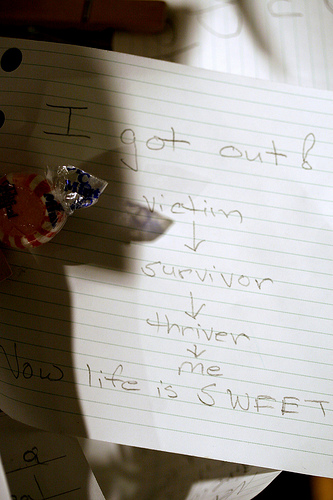 “But he doesn’t hit me, he never has”

“She puts me down a lot, nothing else”

are all common phrases heard on the helpline. Callers are taking the step to make that initial call because they feel something somewhere isn’t ‘right’, often the caller doesn’t know that their experiences count, as abuse.

Perhaps the caller has an image of a victim – maybe through media coverage, TV programmes, and societal stereotypes – and feels that they just don’t fit this profile.Perhaps the caller doesn’t know what the umbrella term ‘domestic abuse’ covers and therefore, doesn’t feel their experiences fit the ‘definition’.

Many callers feel that because their experiences “aren’t as bad” as others’, they don’t need or aren’t worthy of any support, advice or time from professionals. There is no common way of dealing with domestic abuse – just because one person is crying in the support group and you’re not, doesn’t mean to say their experiences are worse or worthy of more support.

There is no typical profile of a victim, or survivor. The only thing that every victim has in common is that they are experiencing or have experienced some form of domestic abuse from a perpetrator.

Women’s Aid describes Domestic Abuse (they use the term domestic violence but I favour the term abuse as it covers more, is more of an umbrella term and hopefully contributes to dispelling the myth that abuse is only abuse if it’s physically violent):

“Physical, sexual, psychological or financial abuse taking place within an intimate or family-type relationship that forms a pattern of coercive and controlling behaviour.”

A note on author’s use of the word ‘victim’:

When I began working with vulnerable women, around 11 years ago, I used to get very prickly and defensive about the use of the word victim. I thought it conjured images of the passive, vulnerable subject at the mercy of the powerful, in control abuser. When talking about people I worked with, I would favour client, or service-user and use ‘survivor’ if I was talking specifically about somebody who had experienced abuse. It wasn’t until a colleague; very recently spoke of her experiences of being a victim of abuse, and that she felt a very noticeable transition from being a victim to being a survivor. She said she as a person knew exactly when that transition happened for her. This conversation made me feel quite differently about using the word victim. I also think that if people are having difficulty in recognising their experiences as domestic abuse, for me as worker to say, ‘you are a victim of domestic abuse’ may help in their coming to terms with their experiences, and aid me in reassuring them that I believe them, and I can validate their experiences. I still however, if I’m completely honest, prefer to say, “Somebody who has experienced domestic abuse”. But it’s a personal thing, and each person who has experienced abuse will have their own preferences too.

If you liked Emma’s post, you can find her on twitter and on her blog Pen and Inked.

The image above is a hand written note from a domestic violence survivor. The note shows a framework of victim–>survivor–>thriver–>me. The image can be found from the Topeka & Shawnee County Public Library and was used under the creative commons license.

Thanks to the comment from spicy below about the image of the cycle of violence. The image is an outdated theory and no longer corresponds to theories of VAW. We have since pulled the image. The diagram was taken from moggs oceanlane and used under the creative commons license.