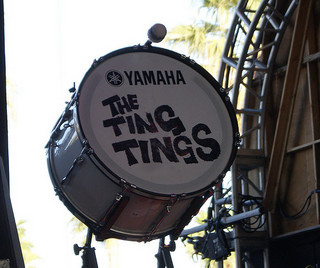 Song of the day: Ting Tings – We Walk

Years ago if you were in a band in Manchester, or the surrounding Greater Manchester area, and you wanted to get somewhere locally, throwing yourself at the feet of Tony Wilson was probably your best bet. Wilson may no longer be with us, but a gig at Peter Hook’s venue does seem to be a career step for any local band wanting to build up press and a following.

Without meaning to revert to embittered Stopfordian fanzine writer mode, it does seem fair to say that, post Badly Drawn Boy and Twisted Nerve, the Ting Tings are the best example of Mancunian/Salfordian contrariness and the ‘no thanks, we’d like to do it our way’ tendency to appear in recent years.

What does this have to do with The F-Word I hear you ask? To which I reply that the outsider sentiments of left of centre dance pop song ‘We Walk’ sit well with contemporary UK feminism, as well as always making me think of the Manchester student protests for some reason.

Katie White may have begun her career in girl band TKO, supporting the likes of Atomic Kitten, but her career post TKO has tended to confirm both her and Jules de Martino’s distrust of the music industry. That the debut album was called ‘We started nothing’, and the band deleted an entire second album weeks before it was due to be handed over to their record company, would also confirm this.

So enjoy ‘We Walk’ for what it is. A slice of left of centre slightly defiant outsider pop that is general enough in sentiment to be embraced by any number of causes, or none at all. They started nothing, but that’s never stopped a song from starting something. Saint Etienne’s ‘Nothing Can Stop Us’ was, according to Matthew Collin (in his book ‘This is Serbia Calling’), embraced by Serbian anti Milosovic protesters in the 1990s, and Martha and the Vandellas’ ‘Dancing in the street’ was the soundtrack to the Detroit riots in the 1960s. Why not, in this age of marches and protests, ‘We Walk’?

Picture of the Ting Tings bass drum being suspended aloft by Rasmin, taken at Coachella 2009, and shared via a flickr creative commons licence

Video commentary: The video shows Jules de Martino playing a piano on a stretch of grass at night. Time lapse film techniques have been used to create the effect of frozen dancers who move and dance in an on/off fashion as Jules and Katie walk through and interact with the frozen figures. I think the stretch of grass is near the entrance to Islington Mill in Salford, but I couldn’t swear to it.