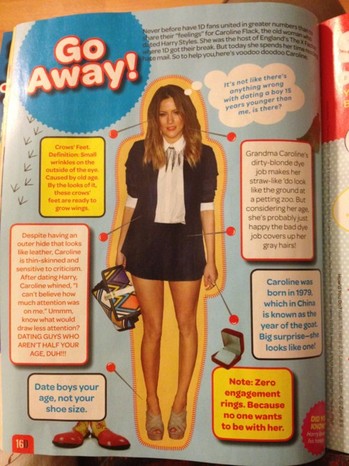 Crows’ Feet and Character Assassinations: Ageism, Caroline Flack and One Direction and Friends

This is a guest post by Sarah Thomasin. Sarah’s poetry blog can be found here, and she is on Twitter @wordgeeksarah.

It’s difficult to write this piece without feeling, well, old, and without becoming the worst kind of cliché of a bitter old woman complaining that ‘in my day young folk respected their elders’. And no doubt the writers of One Direction magazine, “One Direction And Friends“, would paint me as just that: I was born in 1979, actually a little earlier than Caroline Flack, a television presenter singled out for ridicule by the magazine because of her short-lived relationship with 17-year-old One Direction member Harry Styles.

Yes, it’s a big age gap. Yes, in parts of the US, where One Direction And Friends is published, Styles is below the age of consent. Yes, if the genders were reversed, the relationship would probably still attract comment. Compare the raised eyebrows and disapproving editorials which abounded in 2001 when a then 18 year old Billie Piper and 35 year old Chris Evans got married. The media always loves to hate an unlikely couple.

What is markedly different here is the level vitriol being aimed at women on behalf of women.

The phenomenon of women and girls being encouraged to hate the sexual partners of famous heartthrobs is not new. Linda McCartney famously came under fire for ‘stealing’ Paul and extinguishing the hopes of millions of adoring fans. While men are expected to follow some form of honour code and congratulate one another for their sexual conquests, (“bros before hos”, anyone?), women are both encouraged to insult and undermine one another in an ongoing competition for male approval, and are ridiculed when they do so. The fact that the word bitch – commonly used to describe a vicious, backbiting woman – has now come to refer far more to women in general shows how pervasive the expectation that women should hate each other has become. 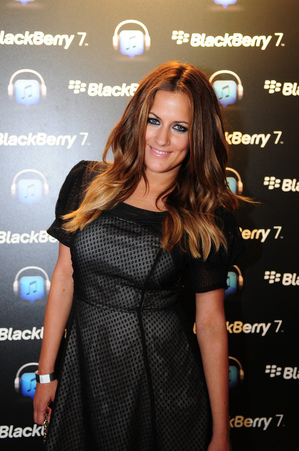 What makes this article particularly disturbing is the inherent ageism. The fact Flack is not wearing an engagement ring ‘because nobody wants her’ is also cited as evidence that she has failed as a woman. If you are not engaged at 32, the article implies, happiness and fulfilment are permanently out of reach. Although the reason for this character assassination is her sexual relationship with a younger man, it is age, not relationship status, which is presented as a problem here. Flack is referred to as an ‘old woman’. Attention is called to her ‘crows’ feet’, despite the fact that no such wrinkles are visible in the photograph shown. Equally fictional grey hairs and grandmotherhood are also projected on to Flack and subsequently derided. The entire piece rests on two obvious but pervasive fallacies. Firstly, that at 32 years of age, Caroline Flack is old. Secondly, that female ageing is a shameful and repellent process, which should be kept out of public view.

And here, for me, is what is most upsetting about this article. Not only does it encourage hatred and mockery of a human being (readers are encouraged to cut out an image of Flack for use as a “voodoo doll”) – as despicable a piece of “journalism” as that is, it is pretty much par for the course. No. It’s the fact that the writer commands his or her target audience to hate and despise their future selves. Telling teenage girls to hate 32 year old women simply because they are 32 year old women plants a self-loathing time bomb which will start to tick louder and louder as those same girls embark on what should be an empowered and confident womanhood.

This is not the message that teenage girls should be receiving, least of all from media targeted directly at them. Sadly though, it is a message far more ubiquitous than one low circulation magazine. Caroline Flack’s presenting career will likely end far earlier than those of her male contemporaries. While male presenters enjoy the opportunity to work in primetime TV well into their 70s, Flack can hope for another 15 years, tops, in the limelight.

Instead of decrying the hurtful and bile-filled nature of an individual magazine piece, perhaps we should be looking harder at a culture in which any journalist, at any level, felt that expressing such naked hatred of adult women was acceptable.

[The first image is by @oneforfuckall. The second photograph is of Caroline Flack and was taken by Official BlackBerry images. It is used under a Creative Commons Licence]