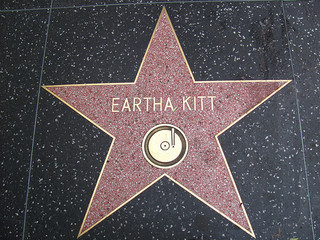 This atmospheric jazz song began its life in the musical The Golden Apple, a 1950s take on both the Iliad and Odyssey, which transplanted Homer’s epic poetry from ancient Greece to the US circa 1910. ‘Lazy Afternoon’ marks the start of Helen’s relationship with Paris.

You can hear the basic blueprint to Kitt’s version in the original cast recording by Kaye Ballard , but the contrast is quite telling. Ballard brings character to the recording, but her level of naughty suggestion contains considerably more innuendo than the version by Kitt. This might seem surprising to those of us who know Kitt mainly for songs such as the original ‘Santa Baby’ and ‘Just an old fashioned girl’.

Those songs are deliciously seductive in tone, and are themselves masterpieces but Kitt’s restrained delivery on ‘Lazy Afternoon’ shows the extent to which she was a very talented singer as well as an excellent show woman. Her take on ‘Lazy Afternoon’ is sombre and eerie, almost haunting and, as such, it takes the song out of its original context and transforms it.

Kitt did get to play Helen of Troy, but not in The Golden Apple Instead Orsen Welles cast her in his version of Faust, having declared her “The most exciting woman in the world”. She is, however, more well know for her role as Catwoman in the 1967 version of Batman.

Eartha Kitt’s star has adorned the Hollywood Walk of Fame since 1960, testement to her power as an actress. Similarly, her renditions of ‘Santa Baby’ and ‘I want to be evil’ have never been bettered. But ‘Lazy Afternoon’, while less well known, has its place in her legacy as well.

Video commentary: This video is made up of a compilation of black and white still images of Eartha Kitt at various stages in her long and triumphant career

Picture is of Eartha Kitt’s star on Hollywood Boulevard. Picture taken by Loren Javier and used via a flickr creative commons licence