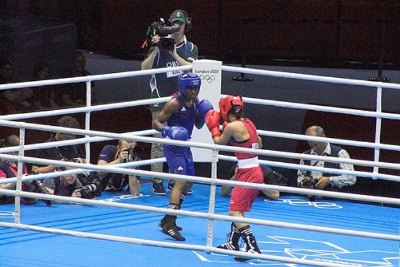 From disgust to admiration

Nicola Adams silences the critics and wins over Antonia Houghton

This is a guest post by Antonia Houghton, who tweets here and blogs here.

Nicola Adams is my new hero. Not just because she won gold at the Olympics, but because she silenced the critics in doing so.

In 1998, Jane Couch became the first officially licensed female boxer in the UK after she won a sex discrimination case against the British Board of Boxing. This was met by vehement opposition from some people.

Take Ian Woolridge who wrote in a Daily Mail column that “none but a vicarious pervert would pay to see two women beating the breasts off one another”.

He also believed that 90% of the British people would “recoil at the disgusting notion of women fighting one another in the prize ring”.

He wasn’t the only one. In 2009, Olympic boxer Amir Khan was quoted in The Sun as saying, “deep down I don’t think women should fight, that’s my opinion. When you get hit it’s very painful. Women can get knocked out”.

[YouTube video of a boxing bout in which Amir Khan is knocked out in 30 seconds by Breidis Prescott.]

It seems he has changed his tune, having tweeted “history made, great fight” after her gold medal win. And he’s not the only one. Nicola Adams was headline news last week, and for all the right reasons.

I feel I should confess, I don’t actually like boxing. It’s not a moral thing. I have just never understood why anyone would want to get punched in the face for a living. But this is about choice.

Watching Adams reminded me why I am a feminist. There are still battles to be won. Adams battled her way to a gold medal. In doing so she proved, like many have before her, that a woman can be many things.

Photo of Adams fighting Mary Kom in the Olympics by cormac70, shared under a Creative Commons licence.