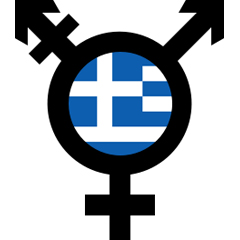 Via press release from the Greek Transgender Support Association:

The Greek Transgender Support Association, a recognized NGO for the support of the rights of the trans community in Greece, is hereby strongly condemning the massive police detention of twenty five (25) trans women on Thursday, August 9th, during the crackdown police operation “Xenios Zeus”.

Specifically, on the night of Thursday, August 9th, during a massive police crackdown, 25 trans individuals were taken and detained at the division of Central Police Station of Athens. They were not given sufficient explanation why they were being taken. They were forced to undergo an HIV test, administered by a Center for Disease Control (C.D.C.) doctor, were subsequently found to be HIV-negative and released afterwards.

We, the Greek Transgender Support Association, express our deepest concern, and outright condemnation of the C.D.C.-assisted police crackdown operations. Especially since they target, among others, one of the more vulnerable minorities, namely trans individuals, who are deprived of basic human rights such as the right to work, be insured and access the health services, owing to the Greek State’s refusal to protect trans rights.

We also deem the forced and obligatory tests by the C.D.C. to be in breach of basic human rights. This is because the way the tests are performed, coupled with the complete lack of deontology and the specific conditions under which they take place, are not those of a European country nor of a just State.

At the same time, we question the recent ruling of the Hellenic Data Protection Authority (HDPA), according to which the HDPA calls itself unauthorised to judge the recent and obvious violation by the state of personal data, in the case of the publicization of the identities of hiv-positive people. The HDPA invoked the Spearation of Powers, but at the same time countradicts itself by proposing amendations to the legislature.

We, the Greek Transgender Support Association, express our solidarity towards the hiv-positive individuals who are being prosecuted, and condemns the police crackdown operations, as well as the involvement of the CDC, for endangering and creating abject conditions for the trans community. Furthermore, we express our complete opposition of all police operations that violate human rights based on nationality, race, gender, religious or other beliefs, sexual orientation, and gender identity. We demand that greek legislation protects gender identity by aligning with the Ruling 2008/913/ΔEY regarding the fight against all kinds of discrimination and racism.

We are in active cooperation with grassroots and NGO organizations inside Greece, as well as European organizations for the rights of the trans community. We will defend, in every legal way, the dignity and human rights of trans people.

THE BOARD OF DIRECTORS

From news reports, it seems that this was part of a large-scale operation during which some 6,000 people were detained.

Officers stopped mostly African and Asian people in the street for identification checks. Most were only briefly detained, but about 1,600 were arrested for illegal entry and sent to holding centres pending deportation. [Source]

It should be remembered that this comes at a time when the Greek economy is facing its most severe crisis since 1974, and the consequent austerity package demanded by the EU and the IMF has resulted in rioting and social unrest. Against this backdrop, there has been a worrying rise in popularity of the Golden Dawn, a right-wing extremist political organisation. In this light, it is perhaps no surprise – although still by no means acceptable – that there should be a backlash which combines racism, transphobia and sexism on such a large scale. I was going to close with a smartass remark about the fate of a country which, for over 2,400 years, has taken pride in claiming it invented democracy, but my irony meter broke.

Image made by Helen from images found at Wikipedia (here and here). Both original images are public domain and so is this one. If using elsewhere, please ensure correct attribution.