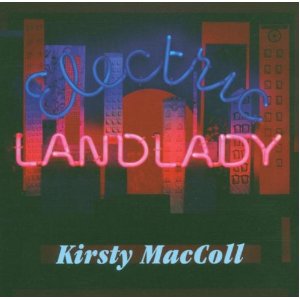 Song of the day: Kirsty MacColl – Walking down Madison

This baggy and hip hop influenced single, a collaboration with Smiths/Electronic’s Johnny Marr, was something of a departure for MacColl. According to Wikipedia, ‘Walking down Madison’ was originally written for Alison Moyet but instead became the first single from the Electric Landlady album.

I find it interesting to listen to the track now, 21 years after it’s initial release, as it’s very much a recession song. While the baggy influence is also more obvious now than it seemed at the time (in 1991 baggy was everywhere: Blur’s ‘There’s no other way’ is another good example of its insidious influence)it’s also strangely endearing in retrospect.

Homelessness and poverty tend to be subjects not often tackled in popular song, and when you listen to Phil Collins’ ‘Another day in paradise’, you can understand why: rich man sings about poor bag lady. Doesn’t seem entirely convincing. Unlike, say, the Ragga Twins ‘Autobiography of a crackhead’, which had more of a ring of truth about it somehow.

‘Walking down madison’ essentially bridges these two extremes: It isn’t gritty, grimy verbatim testimony, but it isn’t sanctimonious and removed from it’s subject matter either. The baggy guitar sound, the hip hop beats, and the rap by Aniff Cousins all help give the track edge, but the lyrics themselves contain enough detail to convey MacColl’s sincerity.

MacColl was something of a musical polymath to the end, as her experiments with salsa show. ‘Walking down madison’ might not have matched her cover of the Kinks ‘Days’ for recognition, but it has an uneasy charm of its own. It is a true ’90s song in that it perfectly captures that early nineties sense of unease and drab disappointment in the UK, and it is a musical collage of what was going on musically as well in that it represents the collision of dance and guitars that happened in the late 1980s, and its sometimes interesting aftermath.

In 2012 as the incidence of homelessness rises, this song is a timely reminder of lessons not learnt.

Image is of Kirsty MacColl’s Electric Landlady album. The album’s title is a pun based on the mishearing of the famous Jimi Hendrix album Electric Ladyland

Video commentary: The video shows a smartly dressed MacColl walking around a city in the day time, possibly New York, amidst smartly dressed business men. It also shows a more scruffily dressed MacColl in what was probably the same city at night time, this time in the company of Londonbeat (in a dancing role), a young woman who is sleeping rough and various other characters. The rapper Aniff Cousins makes appearances in both the daytime and night time shots. The characters in the night time shots arrive in a chauffer driven limo, which they depart in at the end of the video