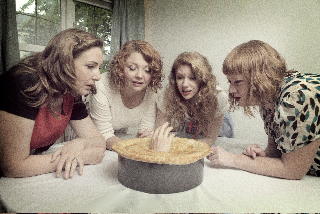 Folk harmony band the Cornshed Sisters have been steadily building up a loyal following. We reviewed their debut album, Tell Tales back in April, and late July saw the band play a highly atmospheric gig at St Pancras Old Church in London. Her appetite already whetted by an appearance by the band on 6 Music, Louise Allan went along

Barry M-fingernailed hands up: I was a huge Kenickie fan in the 1990s. No, I’m not talking about the quiffy one from Grease. I’m talking about the wisecracking peroxide-pop band from Sunderland, of which the teenage Lauren Laverne was a member.

My music tastes have changed since then, but the Cornshed Sisters leapt into my consciousness when I heard the familiar cackle of Marie Nixon, aka Marie du Santiago from Kenickie, on BBC 6Music’s Marc Riley show.

The tunes couldn’t be more different, but the Cornshed Sisters share a mischievous, choir-girls-gone-bad sense of folly with my teenage favourites. I’m secretly really excited to see Marie tonight, tottering around outside the venue with a beaker of wine, working the crowd of friends who have come down to the gig, and queuing for portaloos with the rest of us.

The Cornsheds are clearly making a name for themselves on the north-eastern circuit with their debut album, Tell Tales, and natty live performances. Tonight they bring the party to London’s Kings Cross: not the sparkling new train station and not, thankfully, that headache of a roundabout, but a venue perfectly suited to the band’s minimal, folky harmonies.

If you’d like a taste of the Cornshed Sister, listen to the bands take on Prince’s ‘When Doves Cry’ below.

Picture of the Cornshed Sisters staring with a mixture of expressions ranging from curiosity to horror at a pie with a hand emerging from it. Provided by Hermana PR, with thanks