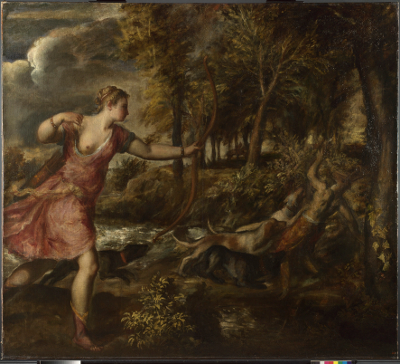 New review: To peep or not to peep

The National Gallery unveils an exhibition that encourages gallery-goers to peep on a naked woman. Ania Ostrowska is not impressed

The myth of Diana and Actaeon is one that demonstrates that Greek (and/or Roman) Goddesses didn’t take prisoners. On seeing Actaeon spying on her and her companions while they bathed, Diana, Goddess of the hunt, simply turns him into a deer, to be hunted down and slain.

Whatever you think of Diana’s way of dealing with a voyeur, it’s certainly clear that she is one woman you don’t want to cross.

However, when Ania went to the National Gallery to see the Metamorphosis: Titian 2012 exhibition, she was confronted by Mark Wallinger’s piece in homage to Titian’s artistic rendering of the story. In this work, a model wanders naked around a small room, which has various holes and windows through which to peep.

There are very few rules the models have to follow but they have to behave “suitably goddess-ish”. First question that comes to my mind is: would that involve turning unruly men into stags to be eaten by their dogs? The answer is no, as they are confined to a small locked space, severely limiting their divine powers. Wearing necklaces and moving slowly has to do.

The picture is Titian’s ‘Death of Actaeon’, © bought by the National Gallery with a special grant and contributions from The Art Fund, The Pilgrim Trust and though public appeal in 1972