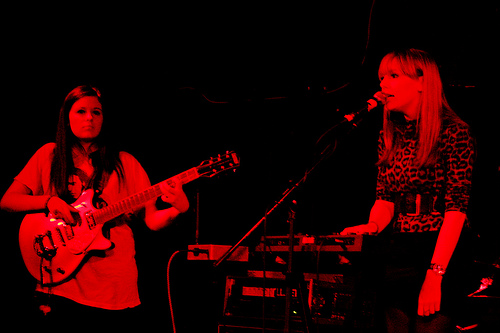 Song of the day: Poppy and the Jezebels – Sign in, dream on, drop out

Poppy and the Jezebels made their first forays into the music world in 2007 and quickly became associated with the underage gig scene, a brilliant idea hit upon by a group of teenage bands who were tired of playing at venues where the drinks licence was at least equally as important as the music. No more playing in front of slobbering or indifferent/superior (delete as applicable) grown up people, the underage gigs and festivals ban anyone over the ages of 18 from attending: a neat subversion for anyone who’s ever had to sneak into a gig underage, and it means the bands get to play for people their own kind of age in a presumably supportive atmosphere.

Five years on, and Poppy and the Jezebels are back with a vengeance.

The point of the song of the day project this summer wasn’t to focus on new music, but exceptions were always going to be made and ‘Sign in, dream on, drop out’ was only released in May 2012.

I’ve included it because I think it is a very likely contender for female agitprop song of the year. Back in 2011, I wrote about another agitprop song – Doyle and the Fourfathers ‘Welcome to austerity’ – and lamented the lack of political pop around at the time, especially political pop by women.

I’m pleased to now be able to provide an answer to the unspoken questions I raised then, and I’m pleased by the way the video to ‘Sign in, dream on, drop out’ references fanzine culture, protests, female emancipation, false aspirations and empty consumerism, female youth unemployment and civil unrest.

If you’re waiting for your GCSE or A-Level results, if you can’t afford to go to University anymore, if you’ve already given up on any prospect of getting a job, and particularly if you are contrasting the future you were promised as a young woman growing up in the nineties and noughties in the UK with the miserable crumbs from the table you’re seeing in 2012, then this one is for you.

Picture of Poppy and the Jezebels performing live at the Hare and Hounds in Birmingham in 2009. The band were opening for Shonen Knife. Picture by abrinksy and used via a flickr creative commons licence.

Video commentary: This video shows the band walking around a busy city centre – most likely their native Birmingham – with placards and a megaphone while handing out flyers to passers by. The placards read ‘Sign in’, ‘dream on’ and ‘drop out’. These sections are intercut with a series of other images, including women in wartime, the band stood outside a branch of Job Centre Plus, spaghetti junction from above, women doing aerobics, street protests, and riots. At the end of the video the band are shown waiting at a bus stop and a little girl is then shown picking up one of their flyers from the pavement