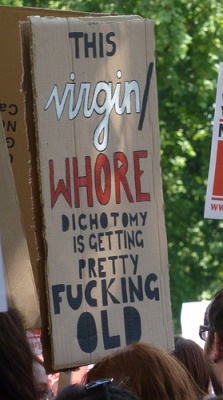 Sex positivism and slut-shaming in reverse

The rejection of slut-shaming and the reclaiming of “slut” to mean “sex positive” is a definite notch on the bedpost (sorry) for feminism. But with it, something dangerous is happening. The sexists have got a bit clever with us. And their tactics are working. They have a new way of guilt-tripping women out of the right to sexual autonomy – and, ironically, they’re using our own rejection of slut-shaming to do it. More and more, we’re stumbling into a kind of slut-shaming in reverse.

Those who have a clear conscience indulging in any or all of the above largely have our relentlessly hyper-sexualised, sex negative culture to thank for it. Myths have been telling them “it’s not rape if…” for years. Even the Justice Secretary thinks “classic rape” is “where someone jumps out from a bush.”

Let’s get a couple of things straight. Firstly, rape isn’t edgy. It’s one of the most old-fashioned things in the world. If rape turns you on, that’s insulting enough; don’t be proud of yourself for it by pretending it makes you an open-minded liberal. It’s more likely it makes you a conservative prude who only relates to sex in its most clichéd, non-challenging, non-threatening form.

Secondly, just because an act of violence happens to involve genitals and you like it, that doesn’t make it a sex positive thing. If the difference between using your penis to degrade a woman for your own arousal, and two people enjoying sex together for mutual enjoyment, is confusing to you, then it is most definitely not others who have a negative attitude to sex.

Thirdly, consent is not some technicality, and morality is about more than avoiding a prison sentence. If someone lacks the physical ability, or luxury of circumstance, to say no to a sexual activity, how is it a choice when they say yes to it?

Something weird happens to our understanding of freedom when there are orgasms at stake. People who would never celebrate a woman’s “choice” to stay in an abusive relationship because of financial dependency, or assume a drugged up person is consenting because they’re quiet, refuse to acknowledge that some of the sex workers they use or watch have exactly the same reality of “choice”.

It’s not just men. I’ve lost count of the number of women bragging about how liberated they are because they have no moral questions about this. And that helps others get away with calling us anti-choice for making sure people have a choice about their lives; anti-sex for thinking that sex should be fun. Is our culture so sex negative that people genuinely cannot differentiate being anti-violence, and anti-sex?

This may hurt the egos of the self-styled defenders of all things pornographic, but I don’t think they’re liberals at all. I’m not sure they even like sex much. When you nudge around the edges, they repeatedly show themselves as nothing but regressive conservatives. After all, how else could anyone differentiate so easily between the treatment of women who have sex for money, and the treatment of women who don’t?

So nice try, but we’re not fooled. It’s the virgin-whore dichotomy, where humanity doesn’t translate from your mother or sister to a woman who is a sex thing. This celebration of women’s right to get donkey punched on drugs is nothing more than telling women when we are allowed to say yes and when we are allowed to say no, then amending the levels of respect we deserve accordingly.

No genuine liberal would shame or guilt women for expressing an opinion about ethical boundaries as sex-haters. They might as well go all out and just call us unnatural or unwomanly. So, sorry if we offend you, but we will keep calling out that cowardly silencing tactic for what it is: boring, puritanical slut-shaming.

Photo of a placard at SlutWalk London that reads “This virgin/whore dichotomy is getting pretty fucking old” by msmornington, shared under a Creative Commons licence.