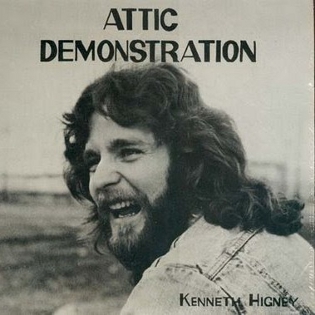 Song of the day: Kenneth Higney – Can’t Love That Woman

Kenneth Higney is often categorised as an “Outsider” artist, a tag applied to music makers who “write songs that ignore standard musical or lyrical conventions, either because they have no formal training or because they disagree with formal rules.” In keeping with this, there are moments of genuine hackneyed brilliance on Higney’s Attic Demonstration album: ‘Funky Kinky‘, in particular, is a rollicking good time. Kenneth’s tone may be off but the bassline and disco moog are funky as hell. ‘Night Rider‘ is also memorable and begins with a rocky hippified atmosphere of wild, sexy abandon that is oddly enhanced by Kenneth also seeming to abandon any sense of timing.

‘Can’t Love That Woman‘ is equally raw and memorably hooky, despite its faults. The thing that files it firmly under “Feminist Interest” (for this feminist anyway) is the way its reminder of enforced femininity unintentionally lends itself to being a celebration of the many wonderful women who Higney would surely not approve of (if we are to assume he is expressing his own sentiments and not playing a character to make a genuinely feminist point). Indeed, Higney’s apparently unlovable woman who signs her name as an autograph, speaks her mind in paragraphs and tells what she sees in photographs sounds to me like a rather formidable character:

“And you’re too sophisticated

And you’re not sentimental

And you’re too opinionated

And you’re not very gentle

No I can’t love a woman like you, girl“

These lyrics are awesome. I would even go as far as to say I think the song would be the ideal play-in/play-out track for a feminist podcast.

To be fair, Higney could simply be saying he, himself, is unsophisticated, sentimental, un-opinionated and gentle and can therefore only love a similar woman. However, the double-standard alarm bells ring anyway because, of course, his description reads like a list of qualities that go against traditional notions of femininity. A quick glance at the titles on his third album Ambulance Driver doesn’t exactly help either. Still, part of me doesn’t want rule to out the idea of Higney not being all he seems. The line “Now think about it darlin’!” followed by a self-satisfied guitar instrumental reeks of entitlement so much that it is effectively as good as satire as far as I’m concerned.

Interestingly, the list of 32 notable performers on the Wikipedia page for Outsider Music only contains seven acts including women: The Cherry Sisters, Icy Spicy Leoncie, Florence Foster Jenkins, Sondra Prill, Portsmouth Sinfonia (mixed), B J Snowdon and Jan Terri. The mainstream music industry may be dominated by men but why should this carry over into DIY areas that sit well outside of that? I’m sure some people would retort that women simply aren’t as interested in making music as men. However, I sometimes wonder if this is perhaps a symptom of women being less able to get away with creative mistakes. I’d also suggest female blowhards are less likely to receive the same level of good will as male ones, whose hamfisted efforts may be widely sniggered at but are nonetheless often admired for their quirky audacity.

The list above is a heartening mix of eccentricity and tastelessness that has deservedly found a place in people’s awkward affections, but it seems that for every non-malicious cringe over the music of performers such as Icy Spicy Leoncie, there are many more genuinely venomous and personal comments directed at, say, Rebecca Black. Maybe we’ll know we have equality when more women with questionable talents are facilitated to have the self-belief of guys like Higney.