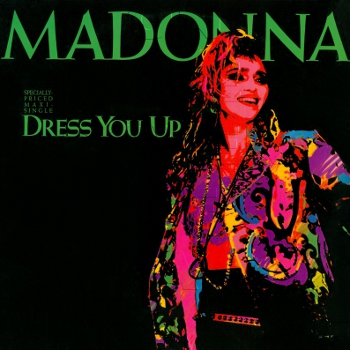 Song of the day: Madonna – Dress You Up

Trying to write about a well-known Madonna song without being distracted by her iconic status is hard. Trying to do it in a feminist context without derailing the task in hand with considerations about everything from her choosing to grow her armpit hair as a younger woman to her problematic actions as a rich, famous and privileged Westerner is even harder. And that’s before we even get to her creative endeavours in areas other than music. (As the ONTD celebrity gossip blog points out, Madonna may be a “self-absorbed megalomaniac” but “so are dozens of equally brilliant male artists in other mediums, whose imperfect but worthwhile new efforts are treated with hushed awe”.)

When it comes to my overall stance, I’d personally go with what bell hooks had to say back in 1993:

“Fiercely critical of Madonna when I see her work projecting the worst aspects of white supremacist, capitalist, patriarchal culture, I am also fiercely affirming of her successful attempts to challenge sexist notions of womanhood, female sexuality, and the like.“

‘Dress You Up‘ is, in my view, a subtle example of Madonna’s challenge to sexist notions of female sexuality. For a start, The lyrics are clearly focused on the style and looks of the person she is offering to further decorate with her “love”. Some readings have described Madonna to be blatantly portraying femininity as “objectified sexuality” in the song but it seems clear to me that, rather than positioning herself as an accessory, Madonna is focusing on the physicality of another person alongside her own desires and actions in relation to that:

“Feel the silky touch of my caresses

They will keep you looking so brand new

Let me cover you with velvet kisses

I’ll create a look that’s made for you“

Granted, it’s clearly a light dance-pop song that therefore perhaps shouldn’t be imbued with too much seriousness but the sense of agency is definitely there.

‘Dress you up’ was written by Andrea LaRusso and Peggy Stanziale. Despite sitting comfortably alongside Madonna’s other synthpop and dance standouts, ‘Lucky Star‘, ‘Holiday’, and ‘Into the Groove’ and achieving the accolade (somewhat excessively) of making it into the Parents Music Resource Center‘s “Filthy Fifteen”, it was one of a number of Madonna’s well-known hits not to make it into the later Immaculate Collection compilation. (I remember having to record the song from a radio documentary and taping over the holes in my tape of the album to put it on there!)

The track doesn’t appear to have been well-sampled but there have been a few cover versions over the years, including a Dust Brothers remake for a 1999 advertising campaign and, more recently, a recording from Glee star Darren Criss for a New York AIDS charity. This current version may not be as good as Madonna’s but seeing references to Darren Criss as a catalyst on Madonna’s original on YouTube suggests that there may be plenty of new recruits to the joys of early Madonna over the next few weeks.

YouTube description: Static widescreen shot of the cover of Madonna’s Like a Virgin album. This features a sepia picture of Madonna sitting on cushions in a white dress with a criss-cross honeycomb bustier design top and a full netted spread skirt with flowers laid over it (possibly a wedding dress).