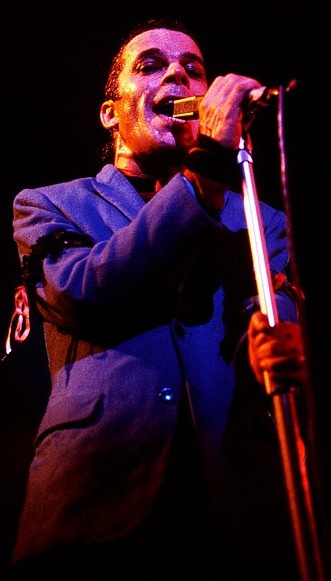 Probably the most notable aspect of 1981’s status as the International Year of Disabled Persons was Ian Dury‘s response. His protest song. ‘Spasticus Autisticus‘ was reportedly written as a “a war cry” and an indication of disdain at the UN-labelled day. The song‘s uncompromising reclaiming of disablist language led to the BBC only allowing airplay after 6pm. This put it at a disadvantage in terms of exposure and it subsequently lacked chart success. Aside from the use of the now-dated term “handicapped”, the record label’s statement about this course of action seems rather apt even today:

“Just as nobody bans handicapped people – just makes it difficult for them to function as normal people – so ‘Spasticus Autisticus’ was not banned, it was just made impossible to function” (quoted in Richard Balls’ 2000 biography Sex and Drugs and Rock ‘n’ Roll: The Life of Ian Dury).

Along with the rest of Dury’s Lord Upminster album, the track was recorded without the Blockheads and enlisted Sly and Robbie on the production side. [EDIT: I’ve included their Seven Seas Players version from the B-side of the 12 inch at the bottom of this post, as it’s the definitive one in my opinion!] The lyrics candidly speak about disability, culminating in a number of female and male voices declaring “I am Spasticus!” to evoke the scene in Spartacus when the surviving slaves show soldarity and strength in numbers in the face of oppression, rather than allow themselves to be spared through others’ suffering.

This collective character, ‘Spasticus’, explains their purpose in the original typography included with the picture sleeve for the single:

“I COME AMONG YOV AS AN EXAMPLE

SENT BY MY TRIBE TO PORTRAY THEM

THE EXTREME MEMBERS OF MY TRIBE ARE KILLED AT BIRTH.

WITHOVT THE AID OF OTHERS MY TRIBE CAN ONLY CRAWL

The deliberate substitution of the letter ‘V’ in place of the letter ‘U’ reinforces the challenge to people in “Normal Land”. However, the most groundbreaking aspect of the song lies in the lyrical calling out of the charity model of disability:

“So place your hard-earned peanuts in my tin

So long have I been languished on the shelf

I must give all proceedings to myself“

Much like a recent ‘inspirational’ photo currently doing the rounds on the internet, such a framing of disability takes place on the terms of those doing the othering.

Ian Dury’s ‘Spasticus Autisticus’ consituted a pioneering chipping away of such oppression a good two years before the inception of the the social model in 1983.

Static YouTube shot shows a close-up of the Seven Seas Players 12 inch version of Spasticus Autisticus on Polydor black vinyl against a narrow white background and wide black border with a thin white stripe down the middle on each side. The text on the label is not readable.

Public domain image of Ian Dury at the Roundhouse, Chalk Farm, London, 1978. Granted for use for any purpose, without any conditions, unless such conditions are required by law.