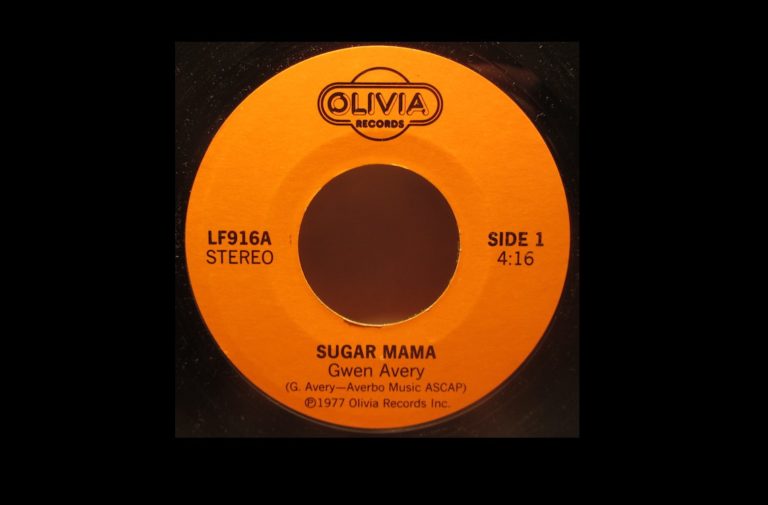 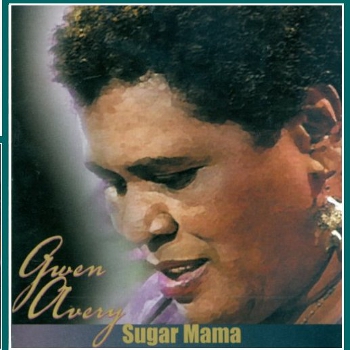 “And I thought I was going to do an album with them, but later I was, I guess, pitched out because I would move my hips, or lick my lips, on stage and it was too much for the women’s community, as I understand it… as I understood it… Anyway I didn’t get to make an album…“

This was Gwen Avery talking to Queer Music Heritage in November last year about her involvement with Olivia Records (for a script, click here and scroll down from the Arnold McCuller interview details in both QMH links).

As the Queer Music Heritage site suggests, it’s possible that Avery’s blues style “didn’t jive with the marketing” of Olivia’s mainly folky output. (“…I mean, it’s so insulting when I think of it, to defy my culture, that’s what they wanted me to do, and I guess, sit there with my legs crossed and my arms folded.”)

Starting out as one of Olivia’s “would-be stars” with the inclusion of the brilliant ‘Sugar Mama‘ on their 1977 Lesbian Concentrate “lesbianthology” of music and poetry, Avery did not release her own first album until several decades later. This is surprising when one considers how striking and memorable Avery’s contribution to Lesbian Concentrate was. Of the song, Avery has said:

“‘Sugar Mama’ just has wonderful memories of when it was written. The gal who took me to Olivia in the first place, we wrote it for them exclusively… It was just a love song. The song has a line ‘when I love you in the morning, when the bells are ringing, when the church bells are ringing, across the street at St. Mary’s and… Marianne Boers, again, that was my lover, friend and person who thought Olivia was great… we devoted our time and energy and love to them…“

Lesbian Concentrate was a reaction to the singer Anita Bryant‘s anti-homosexual campaigning and one track, Mary Watkins’ ‘Don’t Pray for Me’ (EDIT: sung by Linda Tillery) was even a direct response to Bryant. The orange juice themed cover was a reference to Bryant’s position as a spokesperson for the Florida Citrus Commission:

“Along with many of you (we suspect), we were amused when a part-time orange-juice pusher began to rant against homosexuals. Later we were horrified at the intensity of the attack and the support it generated. We now have to match that force – flip-flop it back onto itself. We think the proper response is to recognize our bonds and support each other as strongly as we can. This is more than just time to come out. We think it’s time for energetic affirmation of lesbian identity and culture.“(archived liner notes)

Proceeds from the album went to the Lesbian Mothers Defense Fund.

This image alternates throughout the video with three black and white head and shoulders shots of Gwen (wide black border). The first shows Gwen in patterned loose-fitting scarves, singing into a microphone and looking over towards an audience. The second shows Gwen in a similar outfit, directly looking at the camera and smiling. The third shows a laughing show-woman in a trouser suit and trilby with her right hand on her hip and left hand up as if to say “Eureka!”

Image descriptions: The featured image shows the 1977 seven inch single version of ‘Sugar Mama’, which has an orange label and cut out middle. The image with the text shows the cover of the 2000 ‘Sugar Mama’ album release, which features a close-up painting of Gwen Avery’s face.