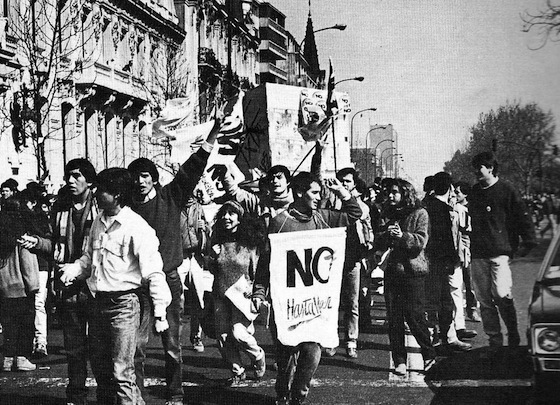 How to wear a photograph

In The Civil Contract of Photography, Israeli writer Ariella Azoulay describes the act of reading a photograph as not merely an aesthetic exercise, but as a civic skill. For Azoulay the photograph, particularly one depicting injury and/or violence, is not only a document, but a crucial event: an encounter in which the viewer is addressed as both citizen and witness.

It is in this ethico-political spirit of photography that we come to Sebastián Moreno’s film La ciudad de los fotógrafos (City of Photographers), which recounts the story of the photojournalists who worked to document and publicise the atrocities perpetrated by the Pinochet regime. Moreno’s title is apt: there are moving scenes exploring the psychogeographial contours of the Chilean capital, scenes in which photographers walk through contemporary streets, pointing out sites of resistance – of horror, of heroics – they had personally photographed less than three decades before.

Moreno’s film is a kind of palimpsest in which the urgency of history finds itself layered into the contemporary. Events of the past continue to be felt viscerally, across space and time

These contemporary moments are occasionally overlaid with soundtrack taken from archival videos, so that the voice of the past literally ruptures into, echoes over, the present. For Moreno’s film is a kind of palimpsest in which the urgency of history, the urgency of what happened here, finds itself layered into the contemporary. Events of the past continue to be felt viscerally, across space and time. As photographer Claudio Pérez says in the film, touching ceramic plaques upon which the names and faces of the disappeared and murdered are printed: “Me da pena… I can’t and won’t allow this to be forgotten. I can’t and won’t forgive. I don’t have… It’s just not possible.”

The “city of photographers” also evokes the civic space of the photograph, independent of the photographer-author. The film is asking how a photographic document can create (and galvanise) a city, a community, a public – particularly one mobilising against an oppressive regime. What are the ways a photograph can act as a gesture of political subversion and challenge a dictatorially imposed version of reality? Photographer Oscar Navarro explains: “We showed what the people refused to see. But when they see a picture of reality, they know they can’t deny what they see. That starts generating a gut reaction and a soul reaction. To me pictures were also a rescue device for those being beaten.”

The photographers speak of the moral dilemma they eventually faced: the question of how to keep from becoming photography vultures, addicted to the violence that made the images possible

However, in our excessively mediated, image-saturated culture, can we still speak of the experience of the photograph with the same urgency? Does the photographic document continue to resonate in a cultural economy in which everything is infinitely photographable and photographed, in which photographs are taken and disseminated with startling speed and ease?

How do we think about the undeniably exciting potential of using cameraphones and social networking sites to increase and intensify the visibility of global political struggle, while also recognising the limitations of any form of awareness not accompanied by radical critical engagement? In other words, how do we keep from being mere consumers of the images of resistance? Towards the end of the film, the photographers themselves speak of the moral dilemma they eventually faced as both producers and consumers of political images: the question of how to keep from becoming photography vultures, addicted to – and therefore desensitised to – the violence that made the images possible.

Navarro: “We were becoming machines of some kind. Started feeling that violence made us ourselves.” As he speaks, we see archival footage of a man taken away by soldiers. He cries out: “Help me!” The cry was recorded: whether it was answered remains unknown.

Pérez: “I was becoming some kind of bloody creep with no values. Was I picturing pain for my own glory [to take a good photo]?”

Viewers confront the living, material context that surrounded and continues to surround the photographs and their subjects

Here, we are far from the objective hygiene of the photograph and its status as pure aesthetic artwork, displayed in the museum and destined for detached, sophisticated perusal. We are also far from the photograph as pure digital information, the touchless ephemeral image, infinitely reproducible and infinitely deletable. Instead, Moreno shows people – the majority of them women – standing in public, in communion with others, bearing upon their bodies the photographs of their beloved dead, like badges, like wounds.

The photographic subjects cease to be anonymous. They cease even to be aesthetic or, at least, only aesthetic. In order to look at these pictures of the dead, you also have to look at the faces and bodies of the living people who still love them, still mourn them: Moreno makes it impossible for viewers to consume the photographs as objects of a distant or discrete time. Viewers confront the living, material context that surrounded and continues to surround the photographs and their subjects. And so the separations between photographer and photographed, subject and object, dead and living, objective and subjective, aesthetics and ethics, begin to dissolve. What we are left with is not just a city of photographers, but a city of people who still remember – and it is here that all struggles against power begin.

The film will be screened as part of RESISTENCIA: Focus on Latin America brought to London Rich Mix by DocHouse.

Elaine Castillo can’t wait to attend DocHouse Resistencia mini-fest this Saturday! She’s just moved back to London and is looking for jobs that will utilise her (not so) invaluable skills in: incorrigibly digressive writing, imaginary filmmaking, hyper-sentimental philosophising on hip-hop and R&B and falafel-making.