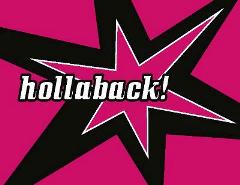 The founders of Hollaback! Sheffield explain why they decided to set up a local branch of the global anti-street harassment movement

This is a guest post by Kate, Anna and Natasha from Hollaback! Sheffield.

A year and a half ago, two of the future Hollaback! Sheffield team had a conversation about how frustrated we were with the constant unwanted and unpleasant attention we were receiving in public spaces that left us feeling helpless and lost for words. Looking to regain control of the situation by empowering ourselves with some witty comebacks to fire at future harassers we began to scour the internet. This is how we stumbled upon the term “street harassment” and the worldwide network of Hollaback! groups.

Although our search didn’t necessarily give us a list of gutsy replies, we learnt another effective and empowering way to “hollaback” – by sharing our stories with an online community committed to challenging societal attitudes and inspiring others to take creative action. As we recorded our recent harassment stories online we felt ourselves become part of a growing force of women and men insisting that street harassment IS a problem and that we WON’T just walk on and take it any longer.

Over the next few months we took part in workshops run by Hollaback! teams from Birmingham and West Yorkshire. Inspired by their enthusiasm, and at the same time sick of being leered at, groped and shouted at on the streets of the city we live in, we decided to bring the fight against street harassment to Sheffield by setting up our own branch of Hollaback!.

Many months later, we are now focused on getting the word out and preparing for our website launch on the 6 September. Next, we plan to raise awareness about the issue in local schools, youth groups and the city’s universities. We know that street harassment starts depressingly young as all of us remember experiencing the staring, winking and whistling as we walked down the street in our school uniforms. For this reason a big part of Hollaback! is to encourage the use of the phrase “street harassment”, as we think it’s really important for young people to be able to put a name to their negative experiences, so that they don’t fade into just an inevitable part of being a young woman, as they did for us. Only when we have the words to describe our experiences can we really understand them. And once we understand them and have the tools to stand up for ourselves, we can truly believe that we have the right to be who we are.

We’re celebrating our website launch with music, cake and sharing stories on 7 September with the help of Sheffield LaDIYfest, and running an awareness-raising day on 18 October along with the University of Sheffield’s Women’s Officer, involving a workshop and the creation of a video of students’ experiences. We’d love other passionate people to get involved tackling this problem in a creative way: making patches, mud graffiti, music, comedy, films, comics and storytelling! Ultimately we want to encourage kids, teenagers, local authorities and the people of Sheffield to come together, break the silence and spread the word that street harassment is a problem in Sheffield, a form of violence against women and something that needs to be addressed.