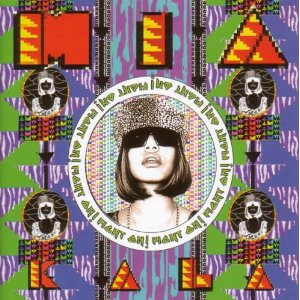 MIA’s ‘underdog song’, and reputedly one of the biggest selling singles XL have ever had, ‘Paper Planes’ has it’s musical origins in a sample from the Clash song ‘Straight to hell’ from 1986. As well as providing a title for the spaghetti western film of the same name, ‘Straight to hell’ was later covered by the Clash’s Mick Jones in collaboration with Lily Allen for the War Child Heroes album in 2009. This tie with war is appropriate when we come to ‘Straight to hell’s offspring, ‘Paper Planes’, which emerged a year before the Jones/Allen collaboration.

A spiky, punky, dubby song which is punctuated by gunshots, the initial lyrical inspiration reputedly came from MIA’s struggles to get a US Visa. Extrapolating from this, she then began to write about perceptions and stereotypes of immigrants, and in doing so turned them inside out. The single version features collaboration with Afrikan Boy, a grime MC based in London originally from Nigeria, who also features on the pin sharp ‘Hussel’, another track from MIA’s album Kala

The video cheekily masks the fake visa lyric by showing MIA and Afrikan Boy making sandwiches ‘all day’ instead of visa’s, but this doesn’t dull the message or the underlying references to the arms trade, who “pack and deliver like UPS trucks.”

And are the following lyrics a veiled reference to the increasingly intrusive searches carried out by passport control?

“MIA, third world democracy, I’ve got more records than the KGB, so no funny business”

We may never know.

Picture is of MIA’s Kala album, which includes a version of ‘Paper Planes’. The sleeve incorporates an image of MIA at the centre, in which she is wearing sunglasses and a furry hat. Text around this image reads ‘Fight on!’ The rest of the sleeve is made up of small complex symbols in green and purple and smaller images of MIA in which the black and white have been inverted.

Video shows MIA and Afrikan Boy working in a sandwich van. It also shows MIA and friends walking and dancing along a crowded street, paper planes flying through a variety of streets and landscapes, and at least one image of a high security van with a skull and crossbones design on it.