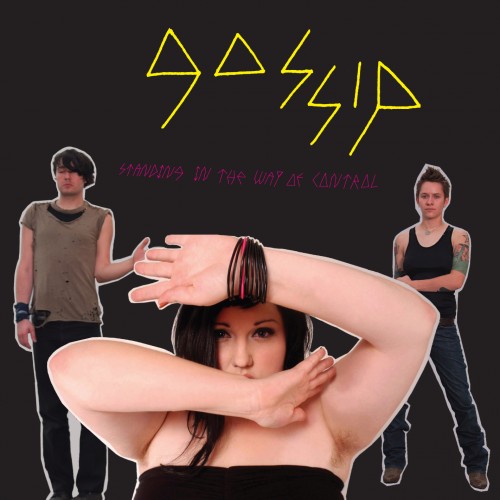 Song of the day: Gossip – Standing in the Way of Control

I’ll confess right now that my first proper introduction to Gossip (or The Gossip as they used to be known) came in the form of an advert for the E4 drama Skins. I’d certainly heard of Beth Ditto but spent large chunks of the latter half of the last decade listening almost exclusively to 1980s boogie and electro funk so I missed a lot. That’s my excuse anyway. And I certainly needed one, seeing as Ditto was already well on her way towards becoming a feminist icon. Also, Gossip had already released three albums by the time the Soulwax mix of ‘Standing in the Way of Control‘ grabbed mainstream attention when it accompanied images of frolicking party-goers in the promo for Skins. The scenes of apparent hedonism, combined with foam and the presence of a person in a bearsuit probably helped but it was really the energy of the song that was most striking. It certainly gave me the push I needed to check out the same-titled album containing the original version. It also led me to the 2005 12 inch release featuring a remix with Le Tigre and artwork by Kim Gordon from Sonic Youth.

It was probably just as well that the Skins campaign gave Gossip wider exposure because it seems ‘Standing’ was used in the ad without the group’s knowledge; according to guitarist Brace “Nathan” Paine, they YouTubed it after someone told them about it (“[We] were like what the fuck? It was random.”)

Of course, there is more to this song than the way it lends itself so well to partying and scenes of decadent abandon. Responding to George Bush’s opposition to gay marriage, Ditto wrote the chorus “to try and encourage people not to give up“.

“Standing in the way of control

By the only way that you know”

It could be seen as contradictory that Ditto later proclaimed Obama to be “smart” for not prioritising gay marriage. However, her framing of this as a strategy on Obama’s part (due to the healthcare priority) and adding “I don’t think he’s a hater” suggests she recognised Bush’s determined efforts to vocally and actively exclude gay people from marriage for what they were: the homophobic enforcement of heteronormativity. Reacting to this on principle is surely not the same as seeing the issue -or indeed marriage itself- as a priority.

YouTube description: The cast from the first series of Skins (left to right): Top row: Anwar, Tony and Sid (all sitting). Middle row: Jal (lying across to the right, in front of the top row), Michelle (on her front, underneath Jal’s head and draped upwards towards Tony), Maxxie (lying on his back over Michelle’s back with an arm out behind Jal’s shoulder) and Cassie (underneath Maxxie, with her arm behind his head). Bottom row (in a huddle on the left and obscured by ‘Skins’ label): Abigail, Chris and Posh Kenneth.