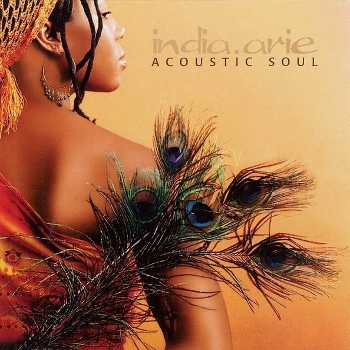 It really just depends on whatever feels good in my soul“

This refusal to be pinned down and defined according to conformity or non-conformity to traditional ‘feminine’ beauty regimes is, in my view, an important part of what makes India Arie‘s ‘Video‘ so liberating.

The song was released as a single in 2001 and is widely described as the first single from her debut album (though AllMusic lists ‘Brown Skin‘ and Discogs highlights ‘Simple‘). It makes its feminism clear in a variety of ways. One example would be in its rejection of the materialism so inextricably bound up with female stereotypes:

“Keep your fancy drink, and your expensive minks

I don’t need that to have a good time

Keep your expensive cars and your caviar

All’s I need is my guitar”

Along with this, ‘Video’ has been described as an inspiration for a diverse range of women:

“In this song India Arie served as an advocate for the average woman during a time where self-image was becoming extremely distorted by unrealistic standards set by the media. She let it be known that it is possible to be happy and content with who you are.” (Madame Noire website)

Chloe at Feministing has flagged ‘Video’ as a “Bad body image day song” and its positive message of self acceptance is obviously very feminist-friendly. However, I’d say it is the song’s engagement with the rather more slippery issue of choice that is perhaps most challenging; as with ‘I Am Not my Hair‘, Arie moves beyond the definitions imposed on us for the choices we make and, perhaps controversially, reminds us that we are far greater than they are. (The fact I feel compelled here to add an overly obvious disclaimer saying “choices do not occur in a vacuum” and are always constrained by norms and social pressures is perhaps significant!) In an academic paper about black feminist creative expression, Tunisia L. Riley looks at ‘I Am Not My Hair‘ in the context of bell hooks’ comment that the “assumption that straight hair is good hair, and Black hair is both problematic and in need of being conquered”. By stating that Arie is “challenging the accountability that comes with processed hair, locked hair, or no hair at all” she indicates Arie’s ability to acknowledge and challenge the restrictions of narrow beauty standards, while also resisting being patronised for sometimes adopting those practices with a basis in them. This seems to tie in with the flexible approach to body hair removal expressed in ‘Video’.

Another song that explicitly shares part of the spirit of ‘Video’ is ‘I Choose‘. Far from being the anti-feminist discussion-ender the title perhaps implies, the song mainly seems to be about refusing to be defined by painful past experiences. I’d say that, like ‘Video’, it acts as a wider and much-needed reminder of the existence of autonomy and agency in the face of very real structural inequalities.

It’s probably true to say that we can only go so far with choice narratives before they are swallowed up by the kyriarchal systems they fail to adequately challenge. Bringing the notion of choice into a debate is always risky but that doesn’t mean letting it become a dirty word is somehow a viable strategy for change. For me, these three songs by India Arie indicate that believing in one’s ability to make choices and resist other people’s categorisation of them is an important part of self care.