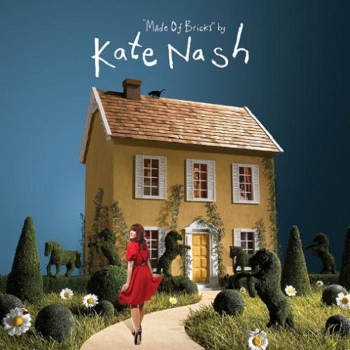 The instantly recognisable opening bars of Kate Nash‘s ‘Foundations‘ readily lend themselves to moments of resignation, realisation and, sometimes, resolution. This has led to frequent and effective use on The Inbetweeners: a comedy about the mishaps and relationship blunders of a group of teenage boys. (It would be nice to see a girl in the programme who is as flawed and interesting as Kate Nash in the lyrics and video of this song but I imagine the question of the representation of women on The Inbetweeners is well-trodden ground.)

The song itself is also dramatic and evocative, with Kate’s distinctively droll delivery adding snarky realism to the song’s depiction of a strained relationship on the brink of closure. The contradiction between the wearily disparaging “I hope I’m not stuck with this one” and admittance in the chorus that “I know that I should let go but I can’t” is a reminder of how difficult it can be to finish relationships when you’re still determining what works for you and what actually doesn’t after all. Here, the joy of not knowing where you stand is that you get to hold onto both the relationship and an element of freedom. In keeping with both these aspects, Kate has talked about not being treated well and being up for “not knowing what’s going on” in the past but then feeling relief when the relationship finally came to an end. This is reflected in the video for ‘Foundations’ (directed by Kinga Burza and winner of Best Pop Video at the 2008 UK Video Music Awards); Kate finally leaves with a suitcase -after the toothbrushes and socks symbolically untangle- and the final shot shows a sign on the door saying “Don’t fall for this”.

Kate’s reported preference to work with female sound engineers wherever possible and her activities such as running a Rock ‘n’ Roll for Girls after-school club and volunteering at the Wish Centre woman’s shelter in East London strongly indicate her feminist leanings. When asked if she is one, Kate has given an unwavering “yes”, highlighting a long list of injustices as her reason.

Despite her obvious commitment to equality issues, Kate had an unfortunate moment of cultural appropriation in June this year when she wore a bindi in the video for ‘Underestimate the Girl’.(The quote from Nisha in this hexgrrrlfriend post provides a good explanation on why white people parading about in bindis is problematic.)

Steph also looks at the song itself (a much more angry, experimental and punky number that was completed in 24 hours and differs greatly from the catchy pop of ‘Foundations’), saying her reason for disliking it is not that she just wants another ‘Foundations’ but for a future Nash who “can mix what she loves about punk and riot grrrl with her own brand of cutesy pop and make an epic record with it.”

I agree and ‘Underestimate the Girl’ isn’t quite my thing either but, as with The Slits’ insistence that ‘Typical Girls’ should be the A-Side over their amazing cover of ‘I Heard it Through the Grapevine’, I’m glad Kate’s making music on her own terms. Her willingness to take creative risks and put something out there that won’t please the mainstream is admirable and as blogger Krystina Nellis points out, such experimentation tends to come in for far less criticism when men do it:

“When a male artist puts together a song in less than 24 hours, they are often praised for their achievement, for being just that talented. And while often those songs are good, just as often they suffer from the time rush, the desire to put out something. See any of Keane’s 24-hour covers, often held up as minimal efforts even by their most ardent fans. But male artists, particularly singer-songwriters, are expected to diversify, to try new things.“

Kate has written on her blog that any of her fans who have followed what she’s been doing for the past few years and heard earlier material such as ‘Caroline’s a Victim’ will “get the new stuff”. She has also emphasised the part her anger has played in her new sound:

“It’s funny how a woman is slayed for expressing anger. I must be hysteric. PMSING HARDCORE. Trying to be punk. How about I’m just sick of crap uninspired chart music, bullies and sexism. I’ve been hurt and I’m angry and playing bass and shouting about it makes me feel better. That’s all it is. And if that freaks people out then good.“

More accessible tracks like ‘Foundations’ and ‘Pumpkin Soup‘ may be my personal favourites of Kate’s but long may this approach continue!

YouTube description: Still shot of the cover of Made of Bricks (the album ‘Foundations is taken from). See embedded picture info at the top of this post for details.

NB: I’ve included the full recorded version alongside a still, rather than Kinga Burza’s video, as the production in the chorus seems to me to be stronger but it may simply be that there is poorer sound quality on the copy of the video version I’ve been able to find.