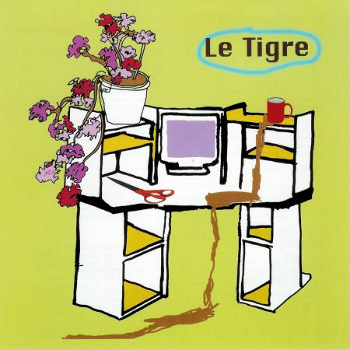 Song of the day: Le Tigre – Get off the Internet

The year was 2000 and we’d made it past the threat of Y2K without a global meltdown or the internet breaking. In fact, many of us were just starting to utilise it for debate and activism. (In my case, this initially involved being a feminist pain-in-the arse in Big Brother forums on MSN. Then, the following year, I misguidedly graduated to doing things like sending a plea to vote out the resident misogynist in the programme to a radical feminist Yahoo group. That’s another story though.) Here in the UK, Catherine Redfern was still a year way from launching this site and, over in the US, underground electro feminist performance artists Le Tigre released their From the Desk of Mr Lady EP.

One of the tracks on this EP was ‘Get off the Internet‘. This acted as a clarion call to activists to return to real life protest. As Johanna Fateman said in a 2002 interview in Venus Zine, it was a reminder to people “not to become isolated in their apartments or their offices with their e-mail.”

“People get so involved in online discourse that it sort of becomes meaningless — it’s kind of like being in a hall of mirrors or something. That’s what that song is about to me — it’s about actually remembering what your priorities are.”

“We definitely don’t want to come off saying that the Internet can’t be used as a totally amazing tool as well. But like any tool, it can also be used destructively or to the exclusion of other tools… I just think that sense of human connection in the flesh is really crucial right now. Also discussions on the Internet — because they’re so anonymous — can get really mean and unproductive really quickly.”

‘Get off the Internet’ came out at a time when online activism was -as I understand it- still finding its way. The internet is obviously a fast-moving system that doesn’t directly involve real-life interaction so it makes sense to suggest that the mess of potential communication problems that can arise when activists organise and exchange ideas through it were still relatively new and raw to most people in 2000. (I know of feminists from the fandom scenes who had been using the internet for years but I know of many more for whom the noughties were their time for becoming integrated into the online life that is second nature to so many of us now.)

As someone who admittedly only occasionally attends demos and protests, I’m obviously biased but, 12 years after Le Tigre yelled at us to step away from the internet, it still seems to me to be the single most important social justice tool of the past decade. (Just take a look at some of the insensitively conducted old interviews you can find on YouTube and consider how quickly those sorts of approaches would probably be called out, shared, critiqued and discussed today. This surely highlights the power of the internet to help create social change.)

Still, all that probably doesn’t go against Le Tigre’s point about the internet: it may be an amazing tool but there’s more to life and, indeed, activism than what goes on online.

Image 3 (0.16): Pencil drawing (on white background) of a headless, footless and handless female-bodied price-tagged clothes-horse figure in a dress. The word “starfish” can be made out down the right arm on the left side and “OH NO! Can’t have me!” can be seen over the pelvic area.

Image 6 (0.28): Black blank tape on a red background with a white line pointed to “iPod- I’m your father” in white. Black label with “KissFM97.7 Do you remember?” in red and white in bottom right corner.

Click here for a description of all 25 images used: Le Tigre – Get off the Internet! video details.docx