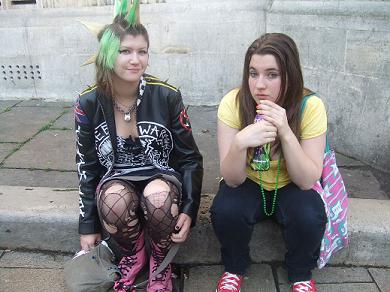 I first heard Vital Disorders about twelve years ago when a friend of mine, who was a first generation punk, put them on a compilation tape for me. I was intrigued by the combination of feminist ranting (‘Prams’) ska flavoured politicising (‘Snatcher’) and get-up-and-dance pop punk(‘Tough Times’.)

A couple of years ago ‘Prams’ put in its first appearance on Youtube, and since then a myspace account has been set up by former band member Suzy Cox, and she has put the songs up online.

Vital Disorders formed in 1980 in Norwich, and could be seen as an example of the awkward moment in post punk when the word ‘punk’ had become mainstream, but there was still the odd moment of punk brilliance occurring however seemingly passé.

This TV appearance dates from about 1981, and could be seen to reflect both the post-1979 election fallout, but also a sense of frustration in terms of the role women were to play in recession plagued Britain. It’s a song about lost chances, thwarted ambition, and feminist rage. It is raging against the notion that a woman’s place is only in the home, and in its final moments it has an almost post-apocolyptic feel, with its chant of ‘The end, the end’. It really does feel as though it is not only the end of childhood dreams that is being marked, but also the end of everything the band have ever held dear.

Image is ‘Punk girl and friend’ by Juggzy Malone. Image shows two girls sitting next to each other on the edge of a step. The girl on the right hand side is wearing a leather jacket, ripped tights, pink boots and her hair is black with green and white spikes. The girl on the left has long brown hair and is wearing jeans and a t-shirt. It is used thanks to a flickr creative commons licence

Video commentary: The clips shows the band performing ‘Prams’ on an unnamed TV show in about 1981. It is a ramshackle performance, during which everyone seems to be getting in everyone elses way. The band appear to have subscribed to a similar kitsch and garish taste in stage clothes to the Rezillos, in that they are all wearing clashing bright colours and the clothes have the air of ‘found’ rather than designed about them. The expressions on the singers face range from wistful to bitter and angry as the song progresses.