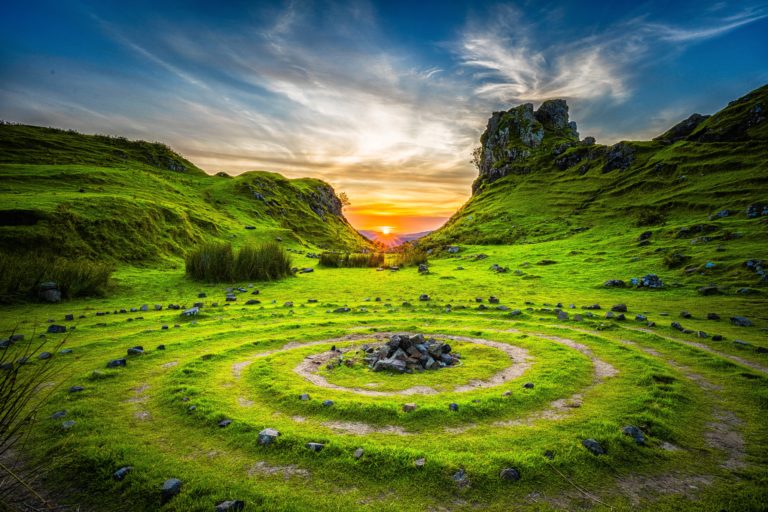 Liverpool avant folk group Stealing Sheep released their debut album Into The Diamond Sun back in August, not long after being honoured in The Guardian as Paul Lester’s New Band Of The Day back July 13. As Lester’s piece recounts, someone on the production team at HollyOaks was also a fan, weaving nods to both early track ‘I Am The Rain’ and single ‘Shut Eye’ into a trailor for the soap. Single ‘Genevieve’, which is a marked departure from the medieval folk of ‘Shut Eye’ and ‘I Am The Rain’, was also released in August.

One band Lester couldn’t resist comparing the folky Stealing Sheep to was the Mediaeval Baebes, who are due to return with their new album, The Huntress in November. They will also be playing the following dates throughout October, November and December.

The Mediaeval Baebes, who are led by Katherine Blake (formerly of Miranda Sex Garden and now the sole remaining member of the original Mediaeval Baebes lineup), formed fifteen years ago. Their initial works stuck firmly to early music, to madrigals, to the mediaeval but since collaborating with John Cale on their third album, Undrentide, they have become increasingly experimental in sound. Innumerable lineup changes have occurred, with Mel Garside (who performs as Maple Bee) being one of many to pass thorugh the ranks. The band have also benefitted from the recent embracing of folk music by younger fans and musicians, as their press release points out:

“In Britain and beyond young musicians have reconnected with a folk tradition of strangeness and storytelling and the power of their unadorned vocals sounds more contemporary than ever.” To this end, The Huntress, the bands seventh album, will feature a version of ‘Cruel Sister’, “the old murder ballad that was the title track of both Pentangle’s 1970 album and the Unthanks’ 2005 debut.” There is also a version of ‘She moved through the fayre’.

Blake produced, wrote, performed, edited and mixed the album, which is described as being “loosely themed around the idea of ‘feminine energy’ and the “adapted sources which Blake has arranged for female voices” include Byron’s ‘She Walks In Beauty’ and Ben Johnson’s ‘Queen and Huntress’ as well as mediaeval Arabic poetry and old Latin. Apparently “References to the moon abound, unsurprisingly.”

The band are caught in a similar musical position to punk choir (and band) Gaggle: “It’s a choir. And it’s a band,” is how Blake describes the Medieaval Baebes.

Another artist who tightrope walks the seams between different musical areas and, who, like Katherine Blake, comes from a classical background is Seaming. Like Zola Jesus’ Nika Danilova, she has operatic vocal capabilities and, again, like Danilova, has saught to weld these vocal skills to a different range of uncompromising musical styles. She is also a multi instrumentalist.

Born in London, Seaming “comes from a family of concert pianists” and “plays clarinet, amplified glockenspiel, vibraphone, analogue synths, celeste and theremin. As a child she studied at the Royal College of Music in London and then moved to Manchester to continue operatic studies under Teresa Cahill at the Royal Northern College of Music.”

It was during her time at the RNCM that she “met bass player and producer Paddy Steer and joined the band Homelife, with whom she has toured internationally.” Other collaborations have included Robert Wyatt, Jean Claude Vannier, electronic artist Leila, piannist Matthew Bourne, The Cinematic Orchestra and avant garde pianist Leon Michener”

Her debut self titled album is to be released on 15 October, and Seaming will be playing at the Vortex in London on 22 November.

Image is the album sleeve to Seaming’s debut album. It is made up of a close up of Seaming’s face, surrounded by orange lights making an upside down V shape behind her head. The name Seaming is written in curly orange and gold writing above her head.

First video: Stealing Sheep, I Am The Rain. The band are shown wearing medieval dress, walking along beach and through woods. Each picks up a glowing orb of light and at the videos climax hold it aloft and stares at a sort of lit up wicker thing as it ascends into the sky

Second video: Stealing Sheep, Shut Eye. This video is an animated video made up by a series of shots involving sleepy looking paper doll puppets hanging from hangers and being immersed in buttons. After a bit the dolls faces and the buttons become interchangable. It ends with a doll sitting on top of a teapot.

Third video: Stealing Sheep, Genevieve. This is a rather 1960s/Stereolab type video. The band are shown performing in sixties clothes and blowing up balloons, kaliedescope patterns, glitter and scratchy pastel sepia tones are used for imagery.

Fourth video: Medieaval Baebes, Veni Veni Bella. There is a five second countdown to the track starting, then the band are shown performing the track while dancing, playing instruments and wearing some very decorative floral head dresses.

Image of the Isle of Skye by Robert Lukeman on Unsplash